Chevrolet of the 1950s - A Decade of the Technical Innovations (David W. Temple) 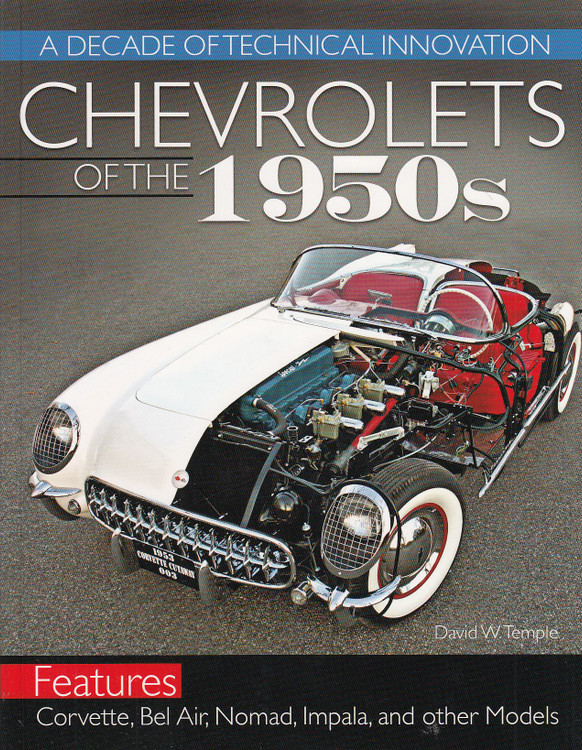 Chevrolet of the 1950s - A Decade of the Technical Innovations (David W. Temple)

As the 1950s dawned, General Motors focused its industrial might on producing revolutionary rather than evolutionary cars with the ultimate goal to become the clear market leader in the automotive industry. To accomplish this goal, the company designed, developed, and consistently released innovative automotive technology. During the decade, Chevrolet introduced the small-block V-8, automatic transmission, air-conditioning, power steering, and many other innovations that made the cars faster, more comfortable, and safer. All of the pieces had fallen into place. General Motors had astute leadership, a brilliant engineering team, forward-thinking stylists, a massive manufacturing infrastructure, and the capability to produce cutting-edge technology. With unbridled optimism and exuberance to meet the demands of the booming U.S. economy of the 1950s, the company designed, developed, and delivered an unprecedented number of breakthrough technologies, and established the blueprint for the modern automobile. Automotive historian and veteran author David Temple goes behind the scenes to reveal how these technologies were designed, manufactured, and installed on Chevrolets fine portfolio of cars: the Corvette, 1955-1957 Bel Air, Nomad, Impala, and many more. Inside General Motors, many dedicated and talented leaders who were determined to make Chevrolet cars the best on the market. Vice President of Styling Harley Earl and his team designed the 1952 Corvette concept car for the Motorama show. After receiving numerous accolades, it was rushed into production. Design chief Bill Mitchell used his design acumen and creative vision as he led his team to style the 1955-1957 Bel-Air. Zora Arkus-Duntov worked tirelessly and transformed the Corvette from a touring car into a genuine sports car. Ed Cole and his engineers overcame many challenges to develop the compact, efficient, and powerful Chevy small-block V-8, which continued in production for decades. Chevrolets of the 1950s retraces the design, development, and production of these cars, but it also covers innovative vital components that were installed in them. If you have been looking for the inside story on GMs arguably greatest decade, the models, and the technology it produced, you have found it.

MSRP:
Now: $67.50
Was:
George Hurst was a hot rodder at heart, but he was also a visionary, an innovator, a brilliant promoter, and he was particularly skilled at building alliances. Hurst developed and marketed a...

MSRP:
Now: $39.95
Was:
THE 1995 Tooheys 1000 at Mount Panorama, Bathurst remains a special race in the history of ‘The Great Race’ with the Seven Sport race day telecast released here for the first time as part...