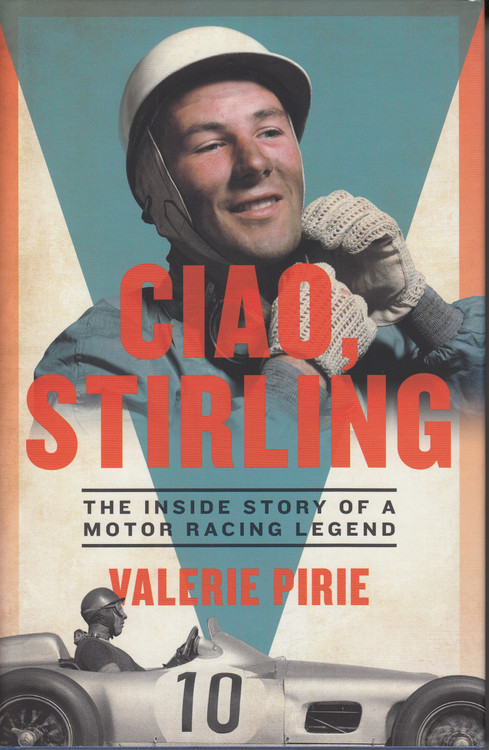 When Valerie Pirie interviewed for her first real secretarial job after college, she did not expect to end up working for Stirling Moss. Regarded as the greatest driver who was never crowned world champion, he would become not only her new boss but also a lifelong friend. Here, in this playful and moving memoir, she opens up about the man behind the steering wheel.

With a joie de vivre and unparalleled pluck, Pirie details the highs and lows of her many years working – and occasionally living – at very close quarters with a true pioneer of Formula One, recounting anecdotes from the track, the office and nights out in the West End of London with one of the best-known names in motor racing. Whether at Goodwood, Le Mans or the Nürburgring, Pirie was often there beside Moss to witness the wins, losses and technical malfunctions – and, of course, his career-ending crash in 1962.

If she wasn’t at his bedside in the hospital, managing his never-ending building works or – on one occasion – transporting his spare dentures to France, Pirie was accompanying Moss wherever he needed her most. Never ‘just’ colleagues, the pair were true companions, and this book brings to light the story of their enduring friendship from the classic post-war era of motor racing through to today.

REVIEWS
“A beautifully written memoir that is full of surprises. A must-read for fans of Formula One, and for anyone who wants to know what the legend Stirling Moss was really like back in the heyday of racing.”

“Valerie provides a most remarkable and fascinating insight into the character and psyche of a true British sportsman, Sir Stirling Moss.”

“When I first met Val she was running Stirling’s SMART team and it was clear then that she was one of his most trusted friends and advisors. Here, she chronicles that rare friendship, which has endured for over sixty years.”

“This book gives a privileged insight into Stirling’s character and foibles – a must-read for motor racing fans and historians of our sport.”

“Stirling has probably done more for British motor sport than anyone else has during their lives. Since he and Val first met, he has relied on her support, knowledge, loyalty and enthusiasm, and their friendship has undoubtedly been one of mutual support and belief.”

“The book is a must-read and is a real glimpse into the life of a genius. Stirling couldn’t have managed without Val!”

March - The Rise and Fall of a Motor Racing Legend

MSRP:
Now: $129.95
Was:
By: Mike Lawrence . 2001 Reprint of 1987 Classic Original "Four Guys and A Telephone" This is an expanded edition of one of the classics of motor racing literature, a book which commanded the...

Rapid Response - My Inside Story As A Motor Racing Life-Saver

MSRP:
Now: $199.95
Was:
By: Dr Stephen Olvey . Dr Stephen Olvey has been involved in saving lives and improving safety in motorsports for nearly 40 years, primarily in his role as Medical Director for the Championship Auto...