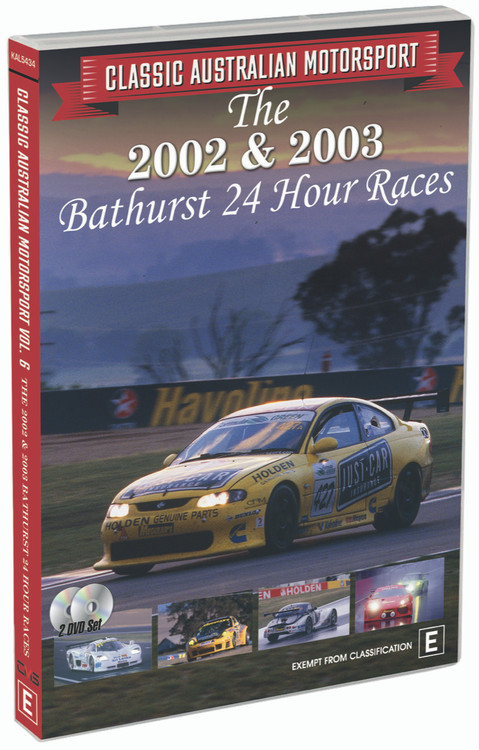 BATHURST has always been special to motorsport fans around the world and, on this volume of Classic Australian Motorsport we take a look back to a race that attracted the eyes of the world to Mount Panorama – the Bathurst 24 Hour.

Held twice in 2002 and again in 2003, the Bathurst 24 Hour featured a range of local and international GT and production cars tackling the famous Mountain ‘twice around the clock’ in an event the likes that had never before been seen in Australia.

The brainchild of PROCAR Series boss – and former Dick Johnson sponsor – Ross Palmer, the 24 Hour brought together a diverse field of cars and drivers from all corners of the world.

Holden’s mighty new seven-litre Monaro had been made eligible for the local Nations Cup series, though specifically with the 24 Hour in mind and claimed victory in both of the years the race was held.

In 2002 it was Garth Tander, Steve Richards, Cameron McConville and Nathan Pretty who scored victory, though they were forced to settle for second place in a Holden 1-2 the following year as ‘King of the Mountain’ Peter Brock, Greg Murphy, Todd Kelly and Jason Bright sealed a narrow win.

On this release we’ve included a range of action from each of the races that were both televised by the Seven Network.

We take in the Sunday afternoon ‘run to the flag’ of the 2002 race as well as the early and closing stages of the 2003 race in these classic races from the archives.

MSRP:
Now: $39.95
Was:
Classic Australian Motorsport – Vol 4 Bathurst 12 Hour The Beginning 1992/3/4 It’s grown into one of the world’s classic GT races these days but on this very special release was...

MSRP:
Now: $74.95
Was:
FOR the first time, the ultimate history of the Bathurst 12 Hour is being published to mark 10 years of the event catering to exotic GT3 sports cars, a thrilling era of racing that opened the iconic...

MSRP:
Now: $39.95
Was:
Classic Australian Motorsport – Vol 4 Bathurst 12 Hour The Beginning 1992/3/4 It’s grown into one of the world’s classic GT races these days but on this very special release was...