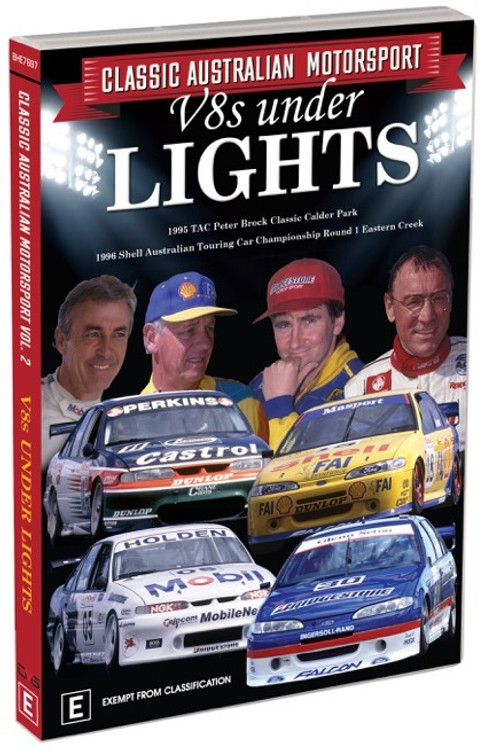 This latest release in the new Classic Australian Motorsport DVD series is one for touring car fans with a great selection of mid 1990s racing, including the one-off 1995 TAC Peter Brock Classic held at Calder Park in Melbourne.

A celebration of all forms of circuit racing named in honour of the nine-time Bathurst winner, this event was held on a Saturday afternoon and evening in November 1995 with the five-litre V8 touring cars the main draw card and two-litre Super Tourers and AUSCARs joining them on the bill.
As it turned out, the man himself Brock ended up winning his own event overall in a field packed with quality including the likes of his new HRT teammate Craig Lowndes, Shell duo John Bowe and Dick Johnson and other stars including Glenn Seton, Mark Skaife, Wayne Gardner and ’95 Bathurst winner Larry Perkins.

We’ve unearthed the Nine’s Wide World of Sports telecast from the Channel 9 archives to release on DVD for the very first time.
In keeping with the theme of V8 racing under lights we’ve also included on this release the opening round of the 1996 Shell Australian Touring Car Championship on the short circuit at Eastern Creek sourced from the Seven Sport archive.
It was the first V8 event of the year, held three months after the Brock Classic, and ended up being a magical round for championship debutante Lowndes. The young Holden ace claimed overall victory under lights, setting up an amazing championship-winning season.
These two great race meetings are now over two decades ago and give us a great opportunity to look back at the category that we know today as the Supercars Championship.

MSRP:
Now: $39.95
Was:
DVD duration:Approximately 4 hours There’s no doubt Allan Moffat will forever be one of the greats of Australian motorsport – a relentless competitor, a consummate professional, the driver’s driver...

MSRP:
Now: $39.95
Was:
THE first Super Speedway where NASCAR stock cars hosted a race outside North America, the Calder Park Thunderdome in Melbourne was the late Bob Jane’s dream that he turned into a reality. It was...