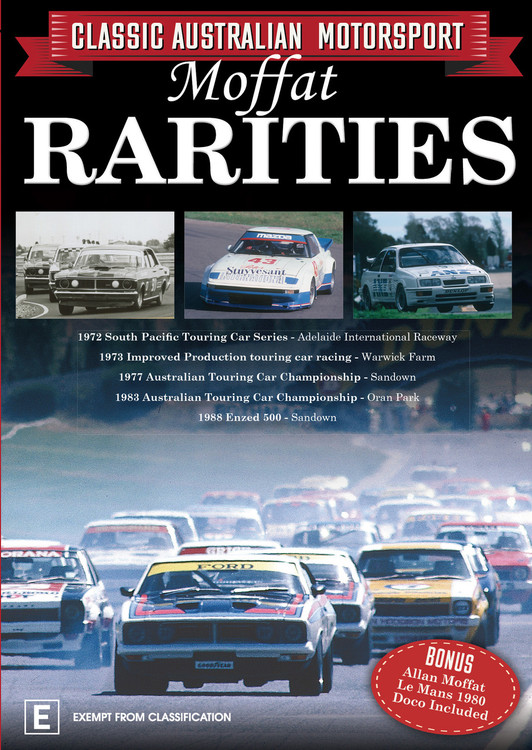 There’s no doubt Allan Moffat will forever be one of the greats of Australian motorsport – a relentless competitor, a consummate professional, the driver’s driver.

His dogged pursuit of victory in some of the greatest racing cars to lap our tracks is the stuff of legend and this latest release from Chevron highlights some of his Classic Australian Touring Car Races, all taken from within the brilliant ABC TV archives.

On this release we feature the Adelaide International Raceway round of the 1972 South Pacific Touring Car Series where Moffat piloted his Falcon GT-HO Phase 3 against the Holden Dealer Team Torana XU-1s of Peter Brock and Colin Bond.

From 1973 we take some Improved Production touring car racing from Warwick Farm with Moffat’s thundering Coke Trans Am Mustang up against Ian ‘Pete’ Geoghegan’s Super Falcon and John Harvey in the Bob Jane Repco V8 Torana. The rain may be falling, but these guys don’t hold back!

Then we follow Moffat’s fortunes in the 1977 Australian Touring Car Championship round from Sandown. Driving the works Falcon XB GT Hardtop he and teammate Colin Bond tackle a hoard of Toranas led by John Harvey, Peter Brock and Allan Grice in a season where he not only ended up winning the title but also the biggest race of them all, Bathurst.

Moffat wasn’t always a Ford man, as a jump to Oran Park 1983 will remind you. In this race the transplanted Canadian is aboard his Mazda RX-7 rotary racer and taking on Peter Brock and Dick Johnson in their big Aussie V8s in a round of the Australian Touring Car Championship.

We round out Moffat’s magnificent career with his last touring car win on Australian soil driving the ANZ Ford Sierra RS500 to victory with the late Gregg Hansford in the 1988 Enzed 500 at Sandown. This is the very first time this race has been released on DVD, making this ‘Moffat Rarities’ disc a must-have for any passionate fan of Allan Moffat, or indeed Australian motorsport in general.

MSRP:
Now: $39.95
Was:
TWO-LITRE Super Tourers were a huge part of world motorsport in the 1990s and the pint-sized tin-top category had plenty of fans ‘Down Under’ in Australia too. On this Classic Australian...

MSRP:
Now: $69.95
Was:
Since 1985, an annual program has been produced on Australia’s motorsport icon, the Bathurst 1000 in all its forms and sponsors names – from the James Hardie 1000 through to the various...