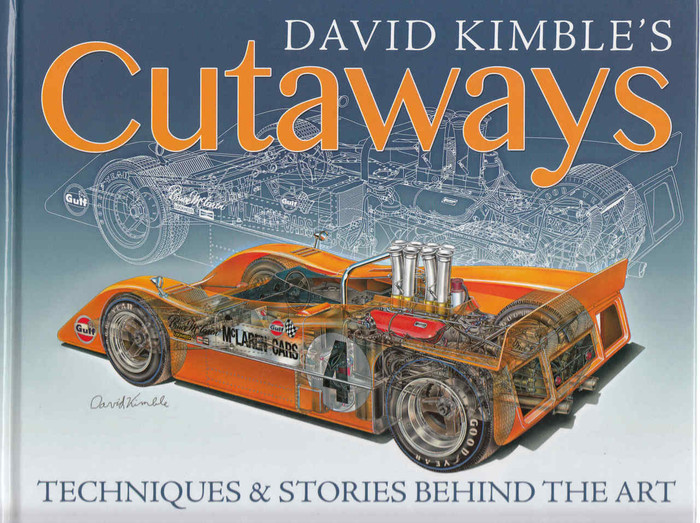 Renowned artist David Kimble reveals the secrets, techniques, procedures, and the dedication to craft that is required to produce these amazing illustrations. He covers the step-by-step procedures, while producing fresh artwork for this book featuring a McLaren Can-Am car as well as a vintage Harley-Davidson.

This book is intended to answer the question that I am most often asked: "How do you do it?" To which I usually respond, "A little at a time," which gets a chuckle, but it doesn't really answer the question. For the first time, in this book I fully disclose not only how I developed my approach and technique but also how this artwork is achieved, along with the stories behind some of the illustrations. I followed an unconventional and circuitous path to at least come close to realizing my vision of how to illustrate the anatomy and physiology of machinery, and I'm coming close to what I want to see.

Growing up in LA, the son of an aerospace engineer, Midget racer, and racing fanatic,David Kimble formed an affection for all thingsautomobile at an early age. This obsession, combined with a skill in drawing, led him to the study of drafting, and technical illustration at the Academy of Technical Arts.

Word of Kimble's artistic talent and love of racing spread quickly through Southern California race shops and eventually reached Jerry Titus, then technical editor of Sports Car Graphic magazine. While David was already working as a contractor at North American Aviation, assigned to the Apollo space program, the artistic beginnings of a career were born.

Requests for his art from Road & Track led David to establish his own business in 1976, David Kimble Illustration. David's works have been featured in a wide variety of major magazines, and his style has attracted a dedicated following.

MSRP:
Now: $99.95
Was:
By: Terry Davey . The cutaway illustrations on the front covers of Haynes car manuals have been an unmistakable identifying feature for more than 40 years. This fascinating book brings together for...

David Vizard's How to Super Tune and Modify Holley Carburetors

MSRP:
Now: $69.95
Was:
By: Peter J Tuthill . From August Bank Holiday 1952 to Whit Monday 1955 Davidstow race circuit in North Cornwall provided the thrills of Motor Racing for the first time ever in the West Country. In...