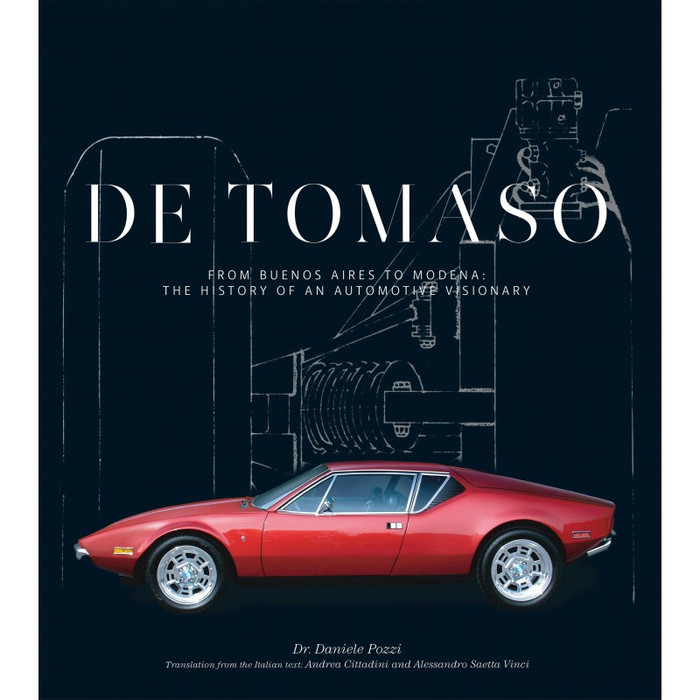 From Buenos Aires to Modena: The History of a Visionary in the Automobile Industry
By Dr. Daniele Pozzi
Translation from the Italian text by Andrea Cittadini and Alessandro Saettta Vinci

The first illustrated and complete book on one of the top marques of the Olympus of automotive history, written in collaboration with the de Tomaso family.

The volume traces the sporting and entrepreneurial story of Alejandro de Tomaso, exhaustively illustrating the characteristics of the models that have made the Automobili De Tomaso famous around the world, such as the Pantera, truly a cult object, especially in the United States. Many different dimensions are interwoven in de Tomaso’s story: the world of the gentlemen-sportsmen who animated the motor-racing competitions in the 1950s-1960s, the genuine and somewhat ‘provincial’ charisma of the artist-mechanics of the Modena area, and the story of the great American industrial dynasties and the intricate developments of the Italian automotive industry.

The book is born from the collaboration with the de Tomaso family, who for the first time have opened the private archives of the founder of the auto maker, making available to the public at large the private photographs, the historical images of all the models and the technical drawings, revealing the secrets and the behind-the-scenes episodes of a legendary production. To further enrich the book an ad hoc photographic campaign will be realized. The texts in the volume, rigorous yet accessible to the non-expert, will be entrusted to a scholar of the history of this Italian business, while the technical section will be written by a team of sports car experts chosen together with the de Tomaso family.

Alejandro de Tomaso arrived in Modena in the years of the economic boom: in that period the district we now refer to as Motor Valley was born, thanks to the genius of figures like Enzo Ferrari, Adolfo Orsi (Maserati) and Ferruccio Lamborghini. De Tomaso was one of the great protagonists of that season, first as a driver, then as a constructor of cars destined to an elite of lovers of high-performance sports cars. But he was also an ambitious entrepreneur, capable of dealing with the great magnates of the US car industry ‘on a par’ (he was a partner of the Ford family) and to stand as a credible interlocutor for the revival of many Italian car industries in the 1970s (Maserati, Innocenti, Moto Guzzi, Benelli).

Daniele Pozzi teaches Economic and Company History at the LIUC – Universit. Cattaneo (VA), where he is also chair of the course on Heritage & Competition, as part of the international course degree in Made in Italy: Management and Entrepreneurship. Since 2001 he has been vice-director of the Archive of Industrial Cinema and Corporate Communication, a research centre for which he has dealt with the realization of numerous initiatives of an informative and scientific nature, as well as the preparation of teaching and multimedia materials. He is the author of a number of articles both in Italian and international magazines, and of books on Corporate History.

Translator (to English Text)
Andrea Cittadini is a journalist, writer, and a communication/PR/marketing consultant based in Monza, Italy. He started working as journalist in 1985, while still attending the University of Milan where he earned a PhD in Political Sciences. Upon graduation, he worked for Yamaha, Ferrari and Maserati as Chief Press Officer until mid-2011 when he formed his own company, The Kerb Group, which includes the magazine Kerb Motori. Andrea has written two prize-winning books, Capolavori italiani dalla collezione Lopresto, (Italian Masterpieces from the Lopresto Collection), and Il Libro delle Corse, Maserati, (The Racing Book, Maserati), and has three others in preparation concerning aspects of Maserati history.

MSRP:
Now: $99.95
Was:
By: Wallace A. Wyss . (OFFICIAL MERCIAN MANUALS REPRINT) The De Tomaso signature sits beneath the Pantera with a pride and glamour that no one would want to take away. This svelte yet ferocious...

History of Lancia from 1906

MSRP:
Now: $59.95
Was:
By: Brooklands Books . Description Experts trace the development of the Italian built Ford powered De Tomas° Pantera for 25 years from its introduction in 1970. Models reported on include the...

MSRP:
Now: $99.95
Was:
By: Wallace A. Wyss . (OFFICIAL MERCIAN MANUALS REPRINT) The De Tomaso signature sits beneath the Pantera with a pride and glamour that no one would want to take away. This svelte yet ferocious...

MSRP:
Now: $59.95
Was:
By: Brooklands Books . Description Experts trace the development of the Italian built Ford powered De Tomas° Pantera for 25 years from its introduction in 1970. Models reported on include the...

MSRP:
Now: $65.95
Was:
By: Brooklands Books . This book covers over 40 articles covering the De Lorean from 1977 to 1995. Articles include: Road and track tests, Model introductions, Driving Impressions, Comparisons,...

MSRP:
Now: $89.95
Was:
Published by Brooklands Books, ISBN: 9781855209336 A portfolio of 'road tests' and articles compiled from the world's leading motoring magazines covering the Delage years of production. Reported on...

MSRP:
Now: $99.99
Was:
By: Tom Cotter . Legendary car designer, builder, and painter Dean Jeffries was never one to toot his own horn—part of the reason his extraordinary career in hot rods, Indy cars, TV and movie...