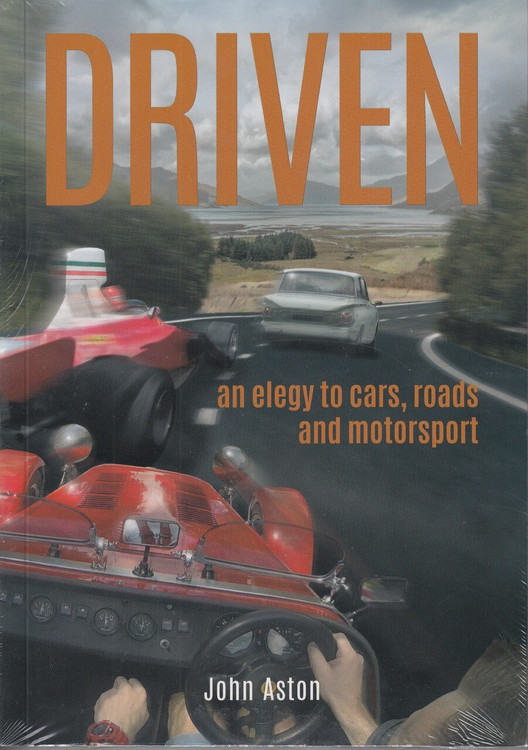 Type a description for this product here...DRIVEN is John Aston's hugely entertaining motoring autobiography. This ambitious and far ranging book begins with his early days as a teenage car enthusiast and race marshal in the late Sixties before covering the wide range of subjects close to his heart. These include the best and worst of Formula One, the icon that is Ferrari, the writer s NASCAR adventure and the delights of long road trips in his beloved Caterham Seven. But that's not all, as you can read about why the NSU Ro80 was a prophet without honour, as well as what the writer thinks about the changing face of motoring journalism. Yes, one J Clarkson is mentioned ... And there's more still, as a major part of the book is a description of a year in British motorsport. The writer's love of the lesser known categories of motor sport illuminates the text, as does his insight into the places, people and machinery making up the sport s diversity. He describes the mood music of events ranging from a round of the British Touring Car Championship to historic race meetings for Cortinas and Minis, before venturing further from the mainstream with drag racing at Santa Pod, speed hillclimbs, autograss and rallying. Oh - he also doubled the average age at a Time Attack meeting. Don t expect objective reporting, as he holds strong opinions, but they are leavened by a tongue firmly lodged in his cheek. Any reader, enthusiast or not, is guaranteed to enjoy reading about these adventures as much as the writer enjoyed having them.

MSRP:
Now: $55.00
Was:
The inspirational story of the female motorsport pioneer who broke through the gender barrier to compete in and win some of the most iconic rallies in the world. Rosemary Smith is recognised...

Ford versus Ferrari: The battle for supremacy at Le Mans 1966 (John Starkey)

MSRP:
Now: $29.95
Was:
Author: John Stakey, Published in 2019, paperback, 128 pages What happened when America's richest car company, producing many thousands of cars per year, went head to head with Ferrari of Italy in...

MSRP:
Now: $195.00
Was:
John S. Allen and Gordon J. Jones Foreword by Jacky Ickx 12 September 2019 This new edition of a classic book tells the story of the celebrated Ford GT40 through a remarkable array of over 850...