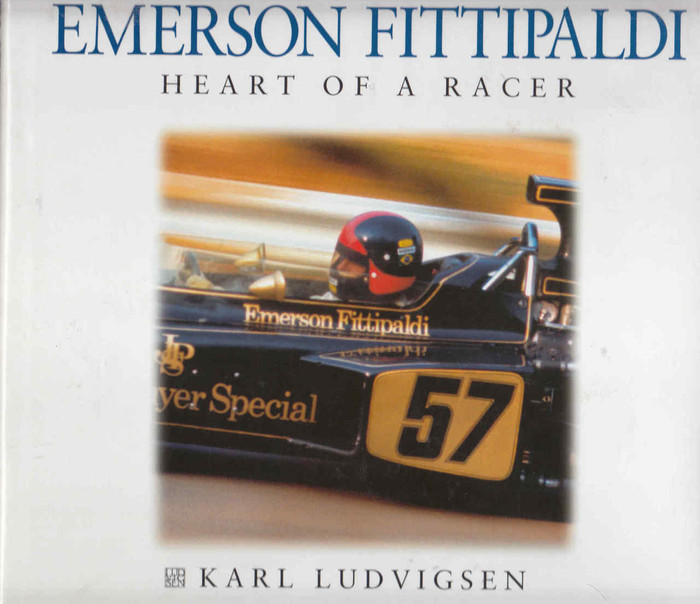 After a dazzling Formula 1 career — in 1972 crowned the youngest-ever World Champion, aged just 25 — Emerson Fittipaldi then conquered the world of Indycar racing, scoring wins in ten consecutive seasons. His is a story of 'high ambition and focused determination,' says author Karl Ludvigsen, 'married in an engaging and eternally youthful personality.'

This spectacularly pictorial volume opens with a chapter about the bold Brazilian's career in the Indianapolis 500-mile race. Fittipaldi led seven of his 11 Indy races and twice won this richest of all motorsport events. He was the first-ever million-dollar winner in the 500 and his total Indianapolis earnings topped $4 million.

In the CART PPG Championship series Emerson won a spectacular 22 victories. Five of them were notched up in 1989, the year he became CART Champion.

Formula 1 fans remember Fittipaldi as the precocio'us 'flying coffee bean' who made an immediate impact, winning the fifth race in his maiden season. Two years later he won the World Championship with Lotus and in 1974 secured the very first world title for the McLaren team. In battles with Jackie Stewart and Niki Lauda he finished runner-up in 1973 and 1975, before making the controversial — some would say questionable — decision to leave McLaren to build and drive a Brazilian Grand Prix car in seasons described in the book as 'bittersweet'.

Ludvigsen, who has known Fittipaldi since 1969, offers fascinating insights into the man who, as well as being a brilliant performer, was a mentor to his younger compatriot Ayrton Senna. Teddy Mayer, who worked with Fittipaldi in both his careers, pens an insightful foreword. Among more than 170 lavishly displayed photographs are those of Max Le Grand, Ove Nielsen and Bob Tronolone. They — and the author's crackling text — bring Emerson Fittipaldi's career vividly to life.

Ferrari by Mailander (Karl Ludvigsen, label with the signature incl.)

Enduring Passion - The Story Of The Mercedes-Benz Brand

MSRP:
Now: $37.50
Was:
Information and guidance on modern, efficient, auto electronic and electrical systems that will work well on your car. This book provides a practical guide to converting, installing and maintaining...

MSRP:
Now: $18.50
Was:
By: Arvid Linde . Description What if we all had to say goodbye to petrol cars tomorrow? Would you be ready? This book will help you find out All you really need to know about electric cars A...

EFI Conversions How to Swap Your Carb for Electronic Fuel Injection