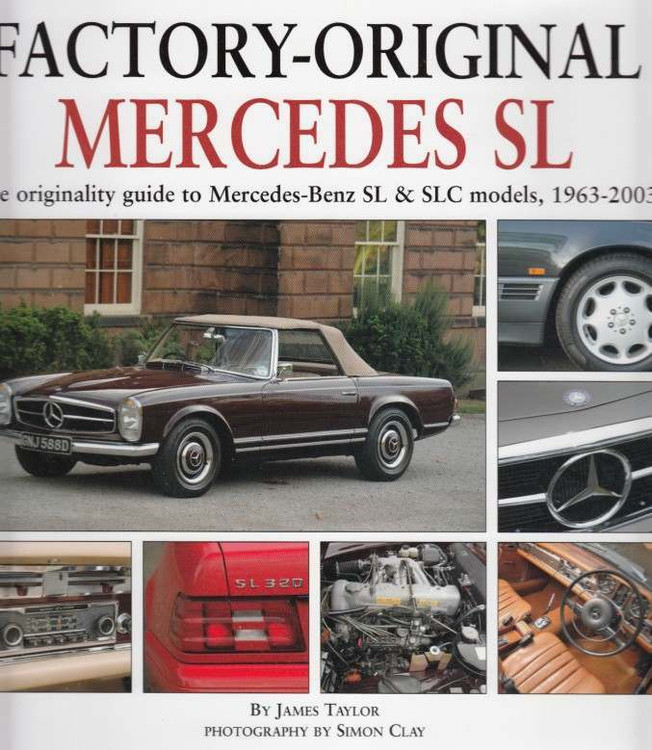 Mercedes have been building fast cars since the earliest days of motoring. With many racing successes gained pre-1914, they went on in the 1920s to produce the fire-breathing S, SS, SSK and SSKL cars with supercharged 7-litre engines. In the 1930s the supercharged theme continued with the 500K and 540K models, exceedingly glamorous but softer and less stark. In the 1950s the company was back in the business of building sports cars with the superb 300SL and the more affordable 190SL.

This was the background against which Mercedes-Benz launched the first of a new family of sports cars, the W113 230SL ‘Pagoda’ model of 1963, which was an immediate worldwide success and was followed by 250SL and 280SL versions. These cars brought together all the lessons learned from the 190SL and 300SL to deliver a range of civilised, quick and stylish machines – cars to be seen in as well as to enjoy driving.

The Pagoda SLs gave way to the R107 range of SLs, introduced in 1971 and in production for 18 years. Where the Pagodas had been available with only one engine choice at a time, the R107s brought a choice of engines to the showrooms. The range also spawned the longer-wheelbase fixed-head SLC models, the C107s, considered by some to be even better-looking than their SL sports car cousins. R107s were replaced by R129s in 1989. These were sleeker than their predecessors, which had earned the nickname ‘Panzerwagen’ in the factory, and the engine range was even broader than before, over time extending from a 2.8-litre ‘six’ to a magnificent 6-litre V12. Uprated AMG versions – also dealt with in this book – were offered too, and the R129s finally left production in 2003. Designed and built to the company’s customary standards of engineering excellence, these SLs are amongst the most desirable sports cars of our times.

All variants of all these ranges, from W113 to R129, are examined in minute detail in this book. Model by model, with over 350 specially commissioned colour photographs, it gives all the details of correct factory specifications and equipment, including body panels, external trim and badging, paint colours, interior trim and trim colours, dashboard, instruments, switches and controls, under-bonnet components, engine and transmission, suspension, steering and brakes, wheels and tyres, lighting and electrical equipment, factory options, and all other features right down to the tool kit, from the beginning of production to the end.

For those interested in acquiring one of these SLs, or for owners wanting to preserve their cars in original condition or to restore them to their former glory, all this detailed information is vital.

MSRP:
Now: $65.00
Was:
By: Brian Long . Description It's hard to believe, but the 113-series Mercedes-Benz SL was launched almost 50 years ago. However, its timeless styling has kept it fresh and attractive in the eyes of...

MSRP:
Now: $59.95
Was:
By: Brooklands Books . This book replaces the previous title on Mercedes's highly popular and collectible SL series of sports cars. This book contains 52 articles drawn from the leading publications...

MSRP:
Now: $199.99
Was:
This detailed and beautifully illustrated book covers the Mercedes-Benz 107 series, which ran from 1971 to 1989. Written by a highly regarded motoring historian, with many years' ownership of the...

MSRP:
Now: $70.00
Was:
By: Anders Ditlev Clausager . The E-type was an astonishing car when launched in 1961: astonishing looks, astonishing performance and an astonishingly low price. Enthusiastic drivers all over the...

MSRP:
Now: $129.95
Was:
This book covers the sporting versions of Ford’s Escort Mk2, including the RS Mexico, Sport, Harrier, RS1800 and the RS2000. Also covered are the Australian variants and Series X cars...

MSRP:
Now: $70.00
Was:
By: Dan Williamson . Launched at the beginning of 1968, Ford's Escort had a new platform, the new Kent crossflow engine, a new all-synchromesh gearbox and, for the first time on a Ford,...