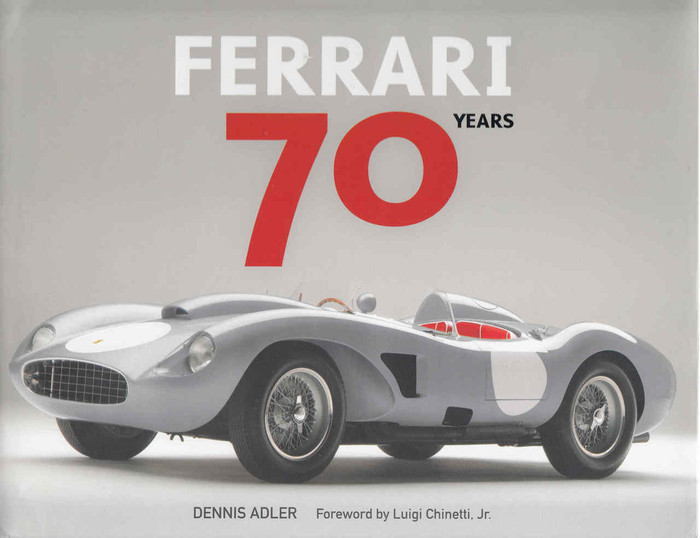 IN 1947, Enzo Ferrari rolled his first car out of the Maranello factory gates and changed the sports-car and motorsports worlds forever. Since that day. Ferrari has been the standard by which all other high-performance cars are judged.

Automotive historian and photographer Dennis Adler recounts Ferrari's remarkable tale in Ferrari 70 Years. a beautifully illustrated and highly detailed account of one of the world's most triumphant and engaging automotive stories. All of Ferrari's iconic road cars are covered, including the 212, 250. 275, Daytona. 5128B, 288 GTO. and modern supercars like the F40. F50, Enzo, and LaFerrari.

The text is illuminated by first-person accounts from Ferrari icons such as Luigi Chinetti. Jr.. Sergio Pininfarina. and Denise McCluggage. and further enhanced with the exploits of racing legends like Dan Gurney, Carroll Shelby. Pedro and Ricardo Rodriguez. Phil Hill. and more.

Ferrari's triumphs and challenges are chronicled
throughout and punctuated by the company's fantastic and stunning cars. Ferrari 70 Years is a must-have tribute to the world's greatest sports-car manufacturer.

DENNIS ADLER is an award-winning author, photographer. and historian and one of America's most published automotive authors.

He has appeared on Good Morning America, The Today Show. and CBS Sunday Morning. The author of dozens of books on collectible automobiles and historic firearms as well as a former magazine editor. Adler has had more than five thousand articles and photographs published during his long career.

He resides in Pennsylvania.

Other books by the author include Porsche: The Classic Era, The Art of the Sports Car The Greatest Designs of the 20th Century. The Art of the Automobile: The 100 Greatest Cars. and Daimler & Benz: The Complete History.

Ferrari - All The Cars, A Complete Guide from 1947 to the present - New Updated Edition

Ferrari 815 The Genesis Of Ferrari (by Franco Varisco, Hardcover)