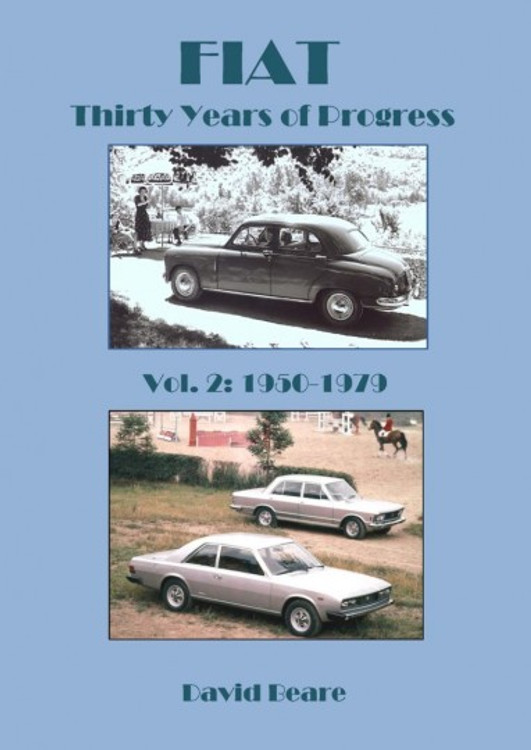 The immediate post-war period from 1950 to the mid-1960s saw Fiat renew their entire model range, replacing carry-overs of the pre-war models once funds were available and the Italian economy had recovered some stability after years of penury. Engineering had progressed, technologies had advanced and some of the most gifted engineers in Italy (Dante Giacosa, Aurelio Lampredi, Oscar Montabone, Gaudenzio Bono and Antonio Fessia) took charge of creating a series of modern cars under the benign guidance of Fiat’s greatest administrator, Vittorio Valletta.

The first new model was the 1950 Fiat 1400/1900 series, engineered along conventional lines with a front engine, rear drive layout, a car which gave Italian taxi-drivers something modern to ply for fares in. Giacosa’s design team really got going in the next few years, following the 1400/1900 with a reduced-scale alternative, the incredibly long-lived 1100, introduced in 1953 and which was still in production in India in 2000.

The 1100 was soon followed by another very long-lived and hugely successful design, the technically advanced rear-engined Fiat 600, which was accompanied from 1957 on by the immortal Topolino replacement, the Nuova Cinquecento – the Fiat 500 – which provided scooter-riding Italians with their first affordable proper car. The Cinquecento lasted until 1975, with close to 3.8 million being made.

Then came the glorious Fiat Dino Spider and Coupé, powered by Dino Ferrari’s posthumous V6, which also powered the Ferrari Dino 206GT and 246 mid-engined cars. Fiat “came out” in 1970 with the FWD Fiat 128, another huge success which was built under licence in at least seven countries. This was followed by one of Fiat’s few failures, the luxurious 130 saloon and astonishingly-beautiful 130 Coupé. Though technically competent, the clientèle the 130 was aimed at preferred to buy a more prestigious Mercedes or BMW.

By 1966 Gianni Agnelli had taken over control of his grandfather’s business and embarked on a round of acquisitions which would include Ferrari, Lancia, Abarth, and eventually Alfa Romeo, Maserati and Innocenti (of Italian-made Mini fame). Next in the new-models line were the ground-breaking Autobianchi A112 super-mini, which paved the way for Fiat’s 127, the tiny 128-based mid-engined Fiat X1/9 coupé and another duff large Fiat, the 132. Redemption was at hand with the conventional but very competent 131 series, which turned into a fire-breathing rally car, winning the World Rally championship in 1977. The end of the 1970s decade began the process of computerisation, automation and robotisation of car production, the first largely automated Fiat being the 1978 Ritmo/Strada series, based on the mechanicals of the old 128.

MSRP:
Now: $89.95
Was:
Hardcover, Published in 2020, 240 pages Before yesterday's dream car became today's SUV, the reputation of Porsche as a manufacturer of fine sports cars was established. It started with the...