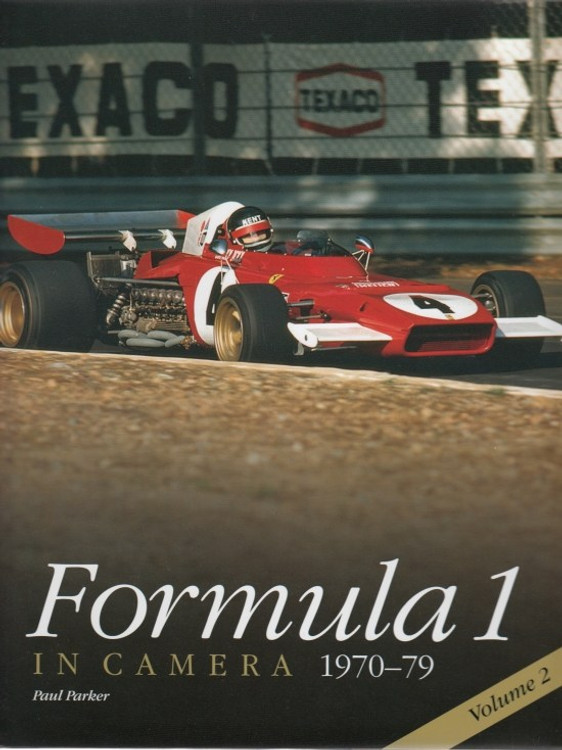 The first volume of Formula 1 in Camera 1970-79, published in 2003, was so warmly received by enthusiasts that this second volume has now been compiled by Paul Parker. Following publication of similar books about the 1950s, 1960s and 1980s, this title becomes the fifth in the acclaimed Formula 1 in Camera range.

The recipe for this new book is essentially the same as that adopted for previous volumes. A collection of over 250 evocative photographs — all in colour — has been assembled to represent this decade in all its breadth, and the author's insightful commentary illuminates the content of each image together with relevant background and perspective. The story of the decade is told, in effect, through photographs of the cars and drivers that took part, with the coverage embracing both winners and losers, stars and also-rans.

The significance of the decade is captured as the visual narrative unfolds. This was the period when sponsorship took root in Formula 1 and technical progress accelerated as a consequence. The cars became much faster thanks to ever-improving tyres, brakes and aerodynamic downforce, the latter ultimately developing into the 'ground effects' philosophy by the end of the decade. Paradoxically engine power output from the 3-litre engines grew by little more than 100bhp during an era in which the evergreen Cosworth-DFV V8 engine predominated, although Ferrari's charismatic 12-cylinder cars won numerous races and Renault achieved success with its 11/2-litre turbo engines in 1979.

The dominant drivers at the start of the decade were Jochen Rindt, Jackie Stewart and Jacky Ickx, and as the years progressed along came Ronnie Peterson, Emerson Fittipaldi, Niki Lauda, James Hunt, Jody Scheckter, Mario Andretti, Carlos Reutemann, Nelson Piquet, Gilles Villeneuve and Alan Jones. Lotus, Ferrari and McLaren were generally the strongest teams of the period, but March, Tyrrell, Ligier, Williams and Renault all emerged during these years, while BRM was a big name to fall by the wayside.

Paul Parker has compiled six previous "In Camera" titles, three each on Formula 1 and sports car racing. As a journalist his work has been published in Octane, Motor Sport, Classic Cars, Forza!, Jaguar World Monthly and the Daily Telegraph. He also track tests historic cars and has raced a Lister Jaguar.
Beautifully produced and lavishly illustrated, Formula I in Camera 1970-79 Volume 2 is a feast of nostalgia for all Formula 1 enthusiasts.

Formula 1 - How it Was Blu-ray