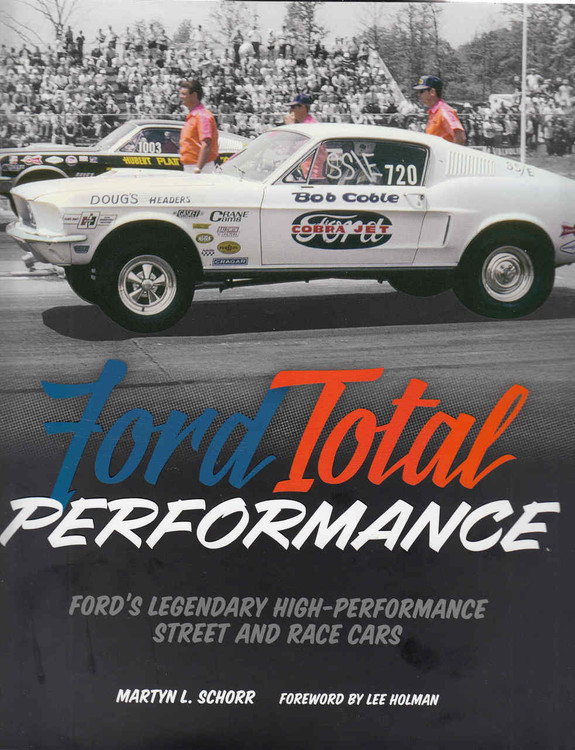 Ford Motor Company underwent a dramatic change in corporate philosophy. Previously, under Ford's chairman, Henry Ford II ("the Deuce"), safety—not performance—was the goal. But by 1962, even he realized his approach needed to change. Ford was nearly invisible to car-crazed baby boomers, and Ford Division general manager Lee Iacocca convinced the chairman that he needed to act decisively or risk losing the emerging youth market to the competition.

Ford Total Performance is all about Ford's prime racing era from 1961 through 1971. In addition to purpose-built race cars, the program also spawned production performance cars, specialty models, and unique concepts such as lightweight drag race cars.

The epic Ford-Ferran war that led to the creation of the legendary 0T40 Le Mans race car is covered as well.

Featuring unpublished period photographs, plus photos and artwork from Ford designers, Ford Total Performance covers all of Ford's classic race and street cars, including Cobras and Shelby Mustangs. It's a must-have book for any fan of classic American performance cars!

MSRP:
Now: $69.95
Was:
By: Lee Parks . - Second Edition, Published 2015 Todays super high-performance bikes are the most potent vehicles ever sold to the public and they demand advanced riding skills. This is the perfect...

MSRP:
Now: $84.95
Was:
The history of the Cobra Jet comes back to life by showcasing the vast array of Ford and Mercury iron that could be ordered with this performance option, including the current, low-production Cobra...

MSRP:
Now: $49.95
Was:
By: Brooklands Books . The Cobra Jet 428 through to the Gran Sport 351s are road-tested. Featured are comparison tests, model introductions, performance data and full specifications. Other...

MSRP:
Now: $149.95
Was:
By: Leo Levine . "No other company has seen its reputation laid on the line in so many forms of the sport for so long a period of time," writes Leo Levine of the 100 years of Ford's illustrious...

Ford - The Dust And Glory A Racing History

MSRP:
Now: $66.95
Was:
By: Haynes . Keep your Ford Transit Diesel in perfect running order and maintain its value with this workshop manual. Models Covered All Ford Transit models (including Tourneo) with...