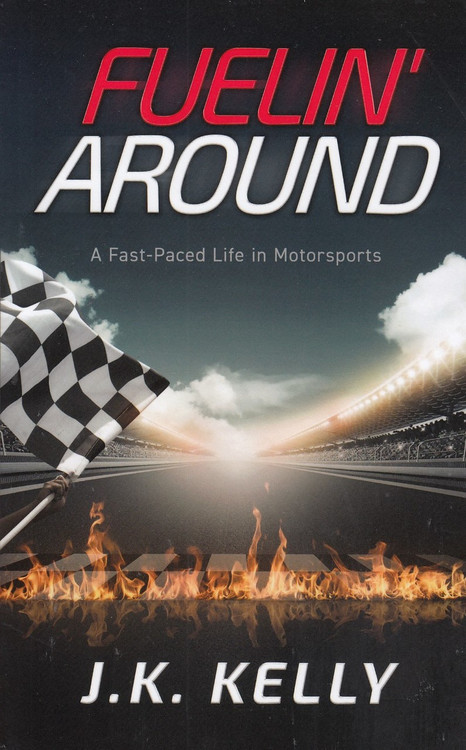 "A page-turner you're going to attempt to read in one shot and if not, it's going to keep you coming back. "

"FUELIN' AROUND is a story of the American Dream of success, courtesy of hard work and dedication. I read the entire book in two sittings.

Fascinating and enjoyable stories, I laughed out loud more than once. "

FUEL/N' AROUND is the story of someone who followed their dreams. Many imagine working in the exciting world of motorsports is filled with trips around the world, racing action, celebrities, champagne corks popping and cameras flashing while the confetti flies. That might all be a part of it
but racing is really about people pursuing their passions in a very fast lane. It looked incredible and I wanted in.

Follow the path of a young motorsports writer/photographer who traveled coast to coast working races, became the P.R. Director for Darrell Waltrip and the Gatorade 88 NASCAR team, and then landed a key role with VP Racing Fuels where he and many others helped build a small Texas company into an international competitor. Whether it was tuning up a
slingshot, drinking a fuel sample, being pulled over by the Israeli Military, strategic thinking, or playing with fire, there was rarely a dull moment. The incident at 38,000 feet was something you just cant make up.

This is an American success story that takes a behind the scenes look at a classic David versus Goliaths battle, of a life on the racing road, and the personal and professional victories and numbing defeats that came with getting what he had wished for. It's about people loving what they do. The reviewers have all said they couldn't put it down. Find out why.

Fast Lady - My Life In Motorsport

MSRP:
Now: $79.95
Was:
By: Joy Rainey . Here is the inspirational life story of a woman who has proved that size doesn't matter in the world of motorsport. Joy Rainey, a person of restricted growth, was weaned on the...

MSRP: $99.99
Now: $29.95
Was:
By: SCH Davis . S C H Davis, known to friends and fans as Sammy, is one of the most popular and enduring figures in the history of British motorsport, universally remembered for his heroic, glorious...

Go Like Hell - Ford, Ferrari, and Their Battle for Speed and Glory at Le Mans (A. J. Bime)