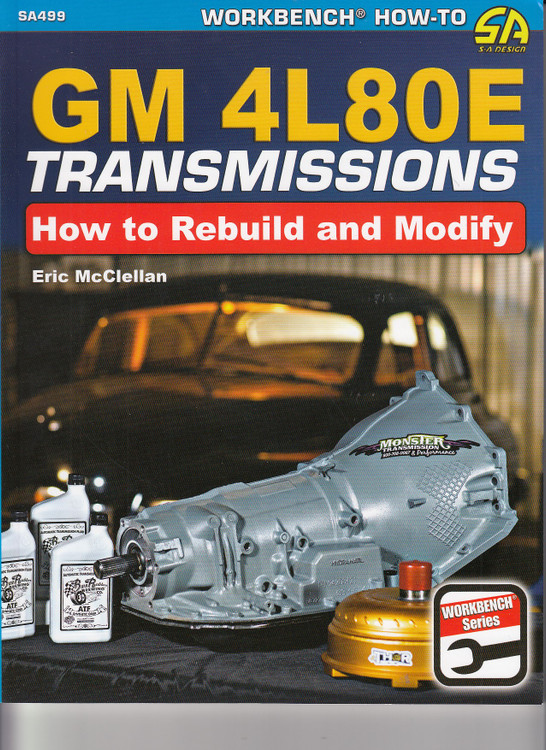 Learn how to rebuild and modify the GM 4L80E transmission!

As the successor to the venerable and popular Turbo Hydra-matic 400 (TH400), the 4L80E was the next flag bearer in GM’s line of automatic transmissions. While serving as the smaller, lighter cousin to the 4L85E, the abundance of 4L80E transmissions manufactured between 1991 and 2013 ensures that these highly capable 4-speed overdrive units will be in service for years to come.

Automatic transmissions are often seen as mysterious and overly complicated, but much of the guesswork has been simplified to its basic elements in this easy-to-follow guide. This book covers the process of identifying the best versions, tearing down the 4L80E, rebuilding, reassembly, and troubleshooting. Upgrades that are available for the 4L80E, which is a popular topic among performance fans and transmission swappers, are also included.

This detailed, step-by-step instructional manual is authored by racer and builder Eric McClellan. Meticulous step-by-step photos of the rebuild process are featured along with torque specs and unique identification of all major and most minor components.

MSRP:
Now: $59.95
Was:
By: Cliff Ruggles . Description Over the last 50 years, literally millions of GM cars and trucks have been built with Turbo 400 automatic transmissions. While these transmissions are respected for...

How to Rebuild and Modify High-Performance Manual Transmissions

How To Rebuild and Modify Your Manual Transmission

MSRP:
Now: $60.00
Was:
Originally published under the title The Book of the Triumph Twins by W.C. Haycraft, this book is one of The Motorcyclist’s Library series published in the USA by Floyd Clymer by arrangement...

MSRP:
Now: $80.00
Was:
This is the first of several volumes to present on-going work in the production of one-off, non-commercially available, 1/12 scale detailed models of Formula One Grand Prix cars. This book...

MSRP:
Now: $80.00
Was:
Get the behind the scenes view of arguably the most iconic automotive movie car and scene in history. Ask any automotive enthusiast what his or her favorite chase scene to appear in a movie is, and...

Cars - Through The Mists Of Time (Peter Filby)

MSRP:
Now: $45.00
Was:
From modest to amazing, from bonkers to beautiful, Peter Filby recounts lifetime's remarkable and often eccentric transport. An amusing recollection by Peter Filby on the cars he has owned including...