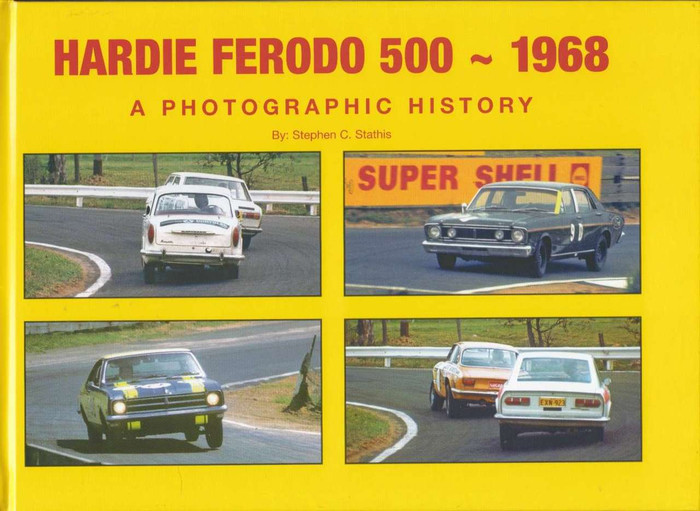 This hardcover book is limited to 250 copies.

The first Hardie Ferodo 500 was a truly significant event because it was the beginning of the V8 Ford vs Holden rivalry at Bathurst. After Ford's 1967 success with the XR GT on the track and in the showroom Holden threw their hat into the ring with the release of the Monaro range. For the 1968 race Ford's updated XT GT was to do battle against Holden's all-new Chevrolet powered HK 327 GTS Monaro. In Class E Alfa Romeo were hopeful of challenging for outright honours yet even with the more powerful 1779cc engine the GTVs were to struggle against the V8s.

Class C was again taken out by a Morris Cooper S just ahead of a Ford Motor Company entered V8 Falcon 500. Datsun 1600s debuted in 1968 and they did not disappoint, taking the first three positions in Class B. These Datsuns were well suited to Bathurst and achieved great success at the Mountain over many years. Another class car that would be written into the Bathurst record books many times was Toyota's Corolla. A.M.I. entered three Corollas, with a young Bob Morris co-driving with Bruce Hindhaugh, winning the "baby" class.

Class cars aside, the main action for the 1968 Hardie Ferodo 500 was with the Class D cars and outright honours. Both Holden and Ford entered three car teams, as was the norm at the time. Harry Firth was in familiar territory running the Ford Motor Company team and David McKay was in charge of the Holden Dealer Racing Team. Long time Ford factory drivers Leo and Ian Geoghegan were in the number one Falcon GT and were backed-up by Barry Seton/ Fred Gibson and Jim McKeown/Spencer Martin in the sister cars. The three factory Holdens were driven by Jim Palmer/Phil West, Tony Roberts/Bob Watson and Paul Hawkins/Bill Brown.

Their victory in the Sandown Datsun 3 Hour race made the Tony Roberts/Bob Watson Monaro the favourite privateer Holden heading to Bathurst. The McPhee/Mulholland Monaro would be the dark horse, having finished three laps down at Sandown.
Qualifying at Bathurst saw the Monaros dominate with Bruce McPhee surprising many when he took pole position. In the end it was an all-Monaro front row with the fastest Falcon of Ian and Leo Geoghegan almost three seconds slower than McPhee's record time.

When the flag dropped on Sunday it was the Monaros that led but after the first stops the Geoghegan Falcon looked the goods, until a miscalculation with a pad change saw them out of contention. After the Geoghegan's brake drama the Seton/Gibson Falcon was leading with the McPhee/Mulholland Monaro not far behind. But it was not going to be Ford's day when a holed radiator forced the Seton/Gibson Ford into the pits. McPhee took the lead and headed to victory.
Privateers, McPhee/Mulholland won easily in the end ahead of the Factory Palmer/West Monaro. Holdens filled the top three outright positions with the best placed Falcon GT well down in the order, five laps in arrears.

MSRP:
Now: $29.95
Was:
By: Peter Henshaw . Buyer's Guide Description STOP! Don't buy a Harley-Davidson Big Twin without buying this book FIRST! Having this book in your pocket is just like having a real marque...

MSRP:
Now: $59.95
Was:
By: Jerry Smith . Harley-Davidson is synonymous with powerful, functional, American motorcycles. As a result of their growing popularity, the number of Harley-Davidsons on the road is multiplying at...