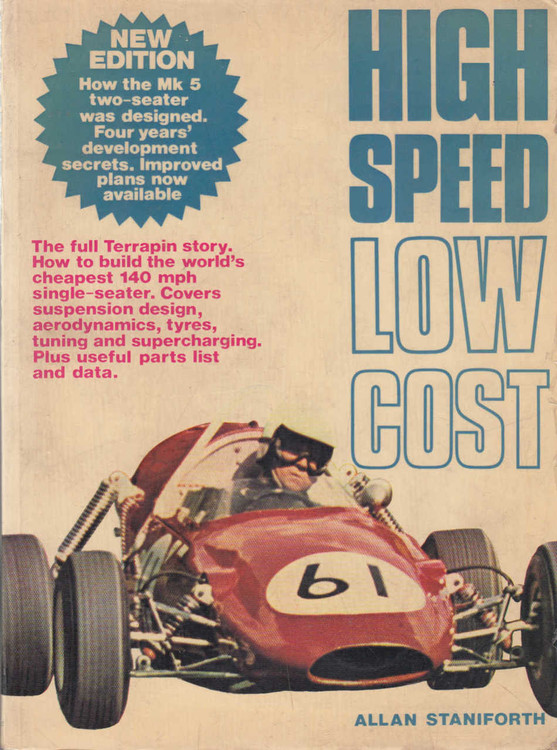 One of the biggest problems facing the growing number of enthusiasts who attempt to build and race their own cars is finding the right information on how to tackle the many problems that such an ambitious task inevitably entails. This book (a revised, amplified edition of the one first published in 1969) tells the story of how Allan Staniforth built and competed in his single-seater Terrapin, with a generous measure of satisfaction and success. It also gives, for the first time, details of the design of the Mk 5 two-seater Terrapin sports-racer.
Besides containing step-by-step instructions on how to build your own 140 mph Mini-engined single-seater racing car, suitable for hill-climbing, sprinting or racing, this book includes a wealth of information of value to all amateur racers, whatever car they drive.

It is comprehensively illustrated with 88 photographs and 23 diagrams, graphs and plans. In addition, it gives full details of the novel and highly successful system—`The String Computer'—used to devise the wishbone geometry, and which can, in fact, be utilised in the design of any other racing car.

Eight detailed appendices comprise a useful bibliography, a list of materials, parts and suppliers, estimated costings, information on suitable racing formulae, plus sundry useful data. A special feature of the book is that buyers can purchase large-size working drawings of the Terrapin in single- or 2-seater form to build their own replica.
Allan Staniforth built the original Mk I seven years ago. Since then 18 other enthusiasts have built one, and 37 more—scattered round the world—are in course of construction. The car has had considerable success (including 30-odd class wins) in hill-climbs and short-distance sprints, culminating at the end of the 1968 season with the establishment of three world speed records for class G cars (750-1,100 cc) gained at Elvington in October. Cars of other owner-drivers have also amassed a variety of successes, both in Britain and abroad.

Allan Staniforth (48) left getting a driving licence late. He was 24 years old before even taking the `L' test. Despite a strictly non-technical education, and a nontechnical sojourn in the RAF, friends who were pioneer special-builders of the petrol-rationed post-war years started his first interest in making cars rather than buying them.

When his first-ever car, a 1927-based Austin 7, literally fell in two on its first trial, rebuilding was a necessity. This was followed by a Wolseley Hornet, assorted Austin 7 saloons variously modified, a Roche Talbot, a Ford-engined 1172 Buckler, an Alta-headed Morris Minor, a 1932 Aston Martin Le Mans ex-works team car, the installation of a BMC 'A' engine into a hybrid chassis beneath a Rochdale GT body, one of the earliest Minis, a later Mini, a still later Mini, and finally the Terrapin.
All but the last were road and family cars as well as racing cars and, if not self-built, they were self-modified. On the way he acquired a wife, a son and a daughter, all events reflected more in the 'Cars for Sale' columns than in The Times' Marriages and Births'.
Allan Staniforth is a professional journalist—a staff reporter for the Daily Mirror—and lives on the outskirts of Leeds. He became, at the rather late age of 38, something of a stay-thin and keep-fit fanatic, with the main intention of lasting longer in reporting and racing. His first fascination of engine tuning is now being displaced by that of chassis and suspension design, as well as supercharging, and spare-time demands of a grow-ing—non profit making—Terrapin Register. He freely confesses that he will probably never achieve three other unfulfilled ambitions—beating his son (now 16) at chess, speaking fluent French and playing the piano.

MSRP:
Now: $99.95
Was:
By: Eric Dymock . Reggie Tongue was only 22 when he drove in his first real motor race, the 24 Hour Grand Prix d'Endurance, at Le Mans. His family trustees had been against him taking part in...