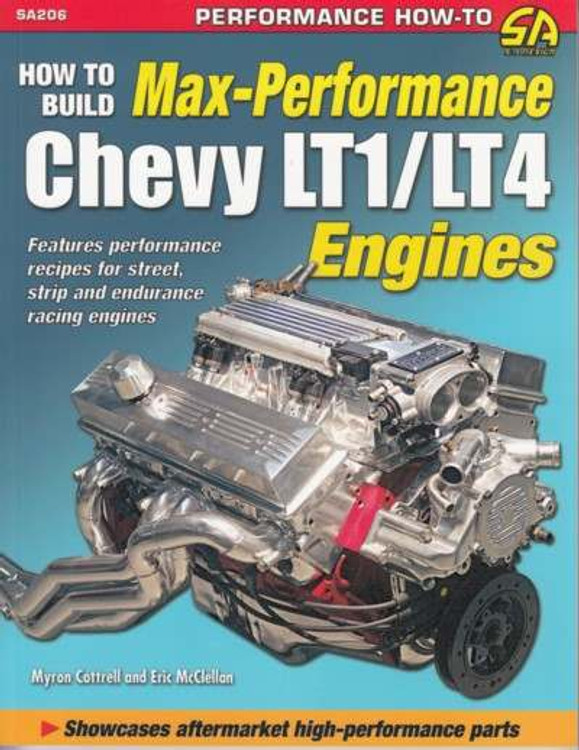 Many say that the Gen II small-block isn't worth building anymore. Nothing could be further from the truth. The LT1 is a smaller package and can be stuffed into places that an LS engine just won't fit. It takes advantage of a gear-driven water pump, front-mount Optispark, and the low-profile intake that was a necessity because of the new lower hood lines on the 1992 Corvette and of the 1993 Camaro. With all the years of head development, along with camshaft profiles from mild to wild, the LT1 is still a force to be reckoned with.

This book spends a little time on basic engine building techniques along with some modern assembly secrets. We also look at several different builds from tame to insane!
This book assumes that you have a basic understanding of engine building and delves into aspects of engine assembly that are beyond the novice builder. We also assume you know four-stroke theory, firing order, and that you can find the spark plug by following the wire.

Since the inception of the first small-block in the fall of 1954, Chevrolet has continued to make powerful and reliable pushrod V-8 engines. Despite the industry's insistence that DOHC was the wave of the future, General Motors stuck to its roots and still continues to produce the venerable engine to this day. If you're reading this, you can probably can attest to its simplicity, durability, quality, and power production.

The first V-8 General Motors produced in the modern era was the 265-ci, it went from drawing board to production in less than 15 weeks. While it only made 165 hp, it sent shockwaves through the automotive community. The 265 certainly had its shortcomings. The stilt-like engine mounts that were nothing more than really long bolts made it difficult to mount in a hot rod. (Later engines had side mounts.) The oil filtering system was less than desirable, as it was a bypass-type design that only filtered about 10 percent of the lubricant. This is a far cry from the full-flow filters of today.
Since then little has been changed of that original design. The engine went through a series of variant sizes, ranging from the initial 265 all the way to the 400-ci iteration.

The first set of big changes came when General Motors introduced its revamped small-block, the Gen II LT engine, in the 1992 Corvette. General Motors created two versions of the engine, the LT1 and the LT4. These V-8 engines were made from 1992 to 1997 in various GM platforms.
For the purposes of this book we use the terms Gen II and LT interchangeably. The engines have also been known to be called the Small-Block 2.

The LT engine was more of an evolution of the small-block design than it was a total overhaul. Many aspects of the old design remained, yet many significant changes were put into service. These include tuned port-induction, reverse-flow cooling for better cooling efficiency and reduced detonation, swapping the belt-driven water pump in lieu of a

gear-driven version, Optispark ignition system with its pancake-style, front-mounted distributor, and most notably a complete redesign of the intake manifold to a low-profile short-runner one-piece casting. One other feature is that the LT intake was dry; all coolant was in the block and heads.
A few minor changes have been introduced over the years, such as larger rod and main bearing diameters and longer cylinder bore castings.
All of these features are addressed in this book as well as a few tips and tricks to bring your LT engine to life and for you to build any power range you need!

Chapter 1 and Chapter 2 deal with the short block of the LT engine. When customers ask us to build them an engine, often times they have future plans for making even more power. The bottom end must be built for that purpose and we advise them to spend the extra time and money building a stout bottom end with the capability to support greater power in mind.
Chapter 3 explores the ever-expanding number of for cylinder heads. The obvious choice is an aluminum head with premium valves designed for high chamber pressure. Also, the valvesprings and retainers need to be set to compensate for the boost pressure.
Chapter 4 addresses valvetrain choices. There are a wide range of options in this department. Factory rocker arms, stud-mounted roller rockers, shaft-mounted rockers, and both hydraulic and solid roller tappets. When making a camshaft choice, you need to keep in mind that you are dealing with an intake that has short runners and a fairly large plenum.
Speaking of the intake, Chapter 5 tackles induction and how to cram as much air as possible into a naturally-aspirated LT engine. A lot of new products have come along since the last LT V-8 rolled off the line. Here, we talk about what throttle body size to use as well as how to properly size an injector for your application.
Chapter 6 discusses ignition and exhaust concerns. A few choices are available for the LT engine in the area of ignition, and each is explored including a coil-on-plug upgrade. Exhaust can be a bit tricky; we cover header size and choice and the differing types of exhaust systems and the benefits of each.
Let's face it; the sound of the whine coming from a supercharger is just plain cool. Almost everyone's plan for a new engine always includes a blower of some sort to increase the power. We cover the modifications that are specific to the LT engine to safely add boost.
Chapter 7 goes through a complete engine build of the LT. We highlight major differences and nuances that are unique to the this engine.
Finally, we dedicate Chapter 8 to documenting which parts the pros recommend to build power at any level for performance and longevity. We cover high-performance parts in various combinations to show the capabilities of the LT. The potential of the LT is tested as we go over builds ranging from stock to a full-out, high-level race engine. We have dyno comparisons in many combinations of engine size and performance. We show you how to make solid, reliable performance out of your LT engine.

MSRP:
Now: $59.95
Was:
By: Robert Bowen, Robert Garcia . - 2014 Authorised Reprint Mitsubishi's 4G63t engine is among the most powerful engines ever in the sport-compact world. It's not uncommon to find one of these...

MSRP:
Now: $59.95
Was:
By: David Vizard . Over the past five decades, the high- performance small-block Chevy has made history on the street and track. In this all-new edition of How to Build Max-Performance Chevy Small-...

MSRP:
Now: $59.95
Was:
By: Sean Hyland, REVISED Edition, 16 extra pages. How to Build Max-Performance 4.6 - Liter Ford Engines covers: he 4.6-liter Ford has become one of the premiere modern performance engines. In fact,...

How To Build Max Performance Chevy Small Blocks on a Budget

MSRP:
Now: $59.95
Was:
By: David Vizard . Over the past five decades, the high- performance small-block Chevy has made history on the street and track. In this all-new edition of How to Build Max-Performance Chevy Small-...

How To Build Honda Horsepower

MSRP:
Now: $59.95
Was:
By: Richard Holdener . f you look at this book, it's a sure bet you want your Honda to go faster. But in the last five years, the Honda performance market has exploded, with dozens of companies...

How To Build Max Performance Ford V-8s On a Budget