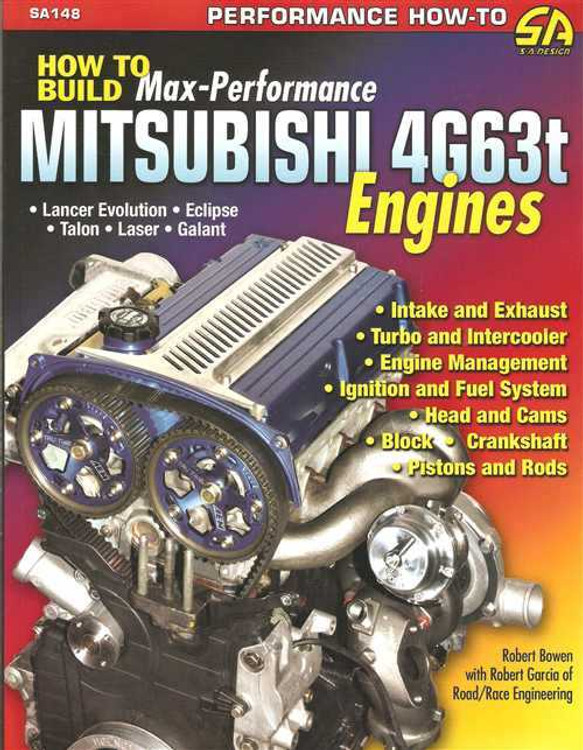 Mitsubishi's 4G63t engine is among the most powerful engines ever in the sport-compact world. It's not uncommon to find one of these four-cylinder, iron-block, aluminum-headed, 2-liter turbocharged monsters making more than 1,000 horsepower with the right modifications and tuning – well above the 200-300 hp produced in the factory-made engines. Bolted into such cars as the Mitsubishi Lancer Evolution, Eclipse, and Galant, and the Eagle Talon and Plymouth Laser, the 4G63t has more than a cult following among sport-compact enthusiasts, who know and respect this engine's immense performance potential at the track or on the street.

Up until now, in-depth performance information on the 4G63t has been hard to find. For this book, author Robert Bowen went straight to the source, Robert Garcia of Road/Race Engineering in Santa Fe Springs, California. RRE is the most well-known and respected Mitsubishi turbo performance shop in the United States, and Garcia is its in-house engine builder. Mitsubishi enthusiasts will benefit from Garcia's expertise and be able to build better, stronger engines than ever before.

How to Build Max-Performance Mitsubishi 4G63t Engines covers every system and component of the engine, including the turbocharger system and engine management. More than just a collection of tips and tricks, this book includes a complete history of the engine and its evolution, an identification guide, and advice for choosing engine components and other parts. Profiles of successful built-up engines show the reader examples of what works, and the book includes helpful guidance for choosing your own engine-building path.

How to Build Max-Performance Pontiac V-8s

How To Build Max Performance Ford V-8s On a Budget

MSRP:
Now: EUR37.03
Was:
By: George Reid . Low-cost formulas for building serious horsepower.. This book addresses high-performance V-8 engines such as the 289, 302, 351ci small-blocks found in Mustangs, as well as the FE...

MSRP:
Now: EUR37.03
Was:
By: Bill Trovato . Book Description Author Bill Trovato is recognized for being one of the most aggressive and successful Oldsmobile engine experts, and he openly shares all of his proven tricks,...