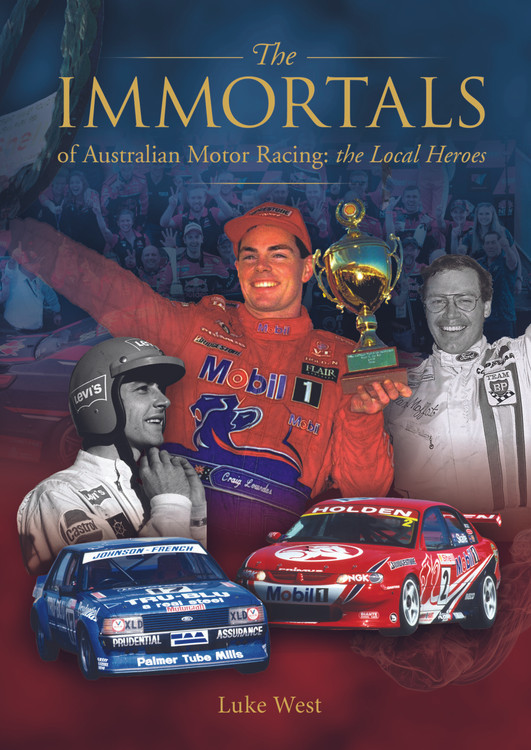 This book takes the Immortals concept made famous in cricket andapplies it to motorsport, choosing the best of the best from Bathurstand the Australian Touring Car Championship (now the Supercars Championship) and other local series.It delves into the careers and characteristics of icons Peter Brock, Allan Moffatand Dick Johnson along with modern-era championssuch as Mark Skaife, Craig Lowndes and Jamie Whincup: heroes who are not just high achievers but influential identities who set anew benchmark and changed local racing forever through skill, determination and sheer will. It tells the remarkable stories behind each Immortal’s rise, from the fabled tale of rock star Johnson to the little-known facts surrounding Lowndes’ Bathurst arrival in 1994 that, a few hours earlier, teetered on the brink of disaster. The Immortals of Australian Motor Racing: the Local Heroes is the third instalment in Gelding Street Press’s Immortals of Australian Sport series. In it, motorsport writer Luke West gives readersinsights into his 10 chosen immortals and their influence onthenational scene.

Luke West, editor and chief writer of Supercars: The Holden vs Ford Era, is a lifelong motorsport tragic who has turned his passion into his work - if you can call it that. He is an Australian motoring historian with an eye for colourful characters, quirky content and significant moments and has a special fondness for digging up previously untold stories and bringing them to life. Luke had a stint at racing newspaper Auto Action prior to spending eight years as editor of Australia's favourite retro motoring magazine, Australian Muscle Car. He was also a V8 Supercars oncourse announcer for several seasons - including anchoring the Bathurst 1000 PA commentary team - following the series around the nation. Luke was born and bred in Sydney. The first word he uttered was 'car' and as a toddler he gave peace signs pronouncing 'Hey, Charger'. He attended his first race at Amaroo Park in 1979 and drove his siblings crazy holding mini Bathurst 1000s around the family home using Matchbook cars. He once owned a Fiat. Luke lives in Sydney's Hills District and is married with two teenage sons, who have not yet caught the racing bug from their old man.

MSRP:
Now: $140.00
Was:
Renowned as one of the greatest creative forces in the world of the automobile, Lotus s Colin Chapman (1928 82) left a mixed legacy. Was he an unparalleled innovator or an uninhibited exploiter of...

MSRP:
Now: $39.95
Was:
WANNEROO Park holds a special place in Western Australian motorsport history and on this release we take a look back at three classic rounds of the Australian Touring Car Championship held at the...

MSRP:
Now: $25.00
Was:
Racer and broadcaster Neil Crompton has had the best seat in the house for the last 40 years of Australian motorsport, an amazing lifetime upgrade to a first-hand, front row seat to see the biggest...

MSRP:
Now: $72.00
Was:
Ken Miles is one of the most famous sports car racers in history, and his time at Shelby American was the pinnacle of his career. Ride shotgun with Ken Miles through the twists and turns of Sebring,...

MSRP:
Now: $33.00
Was:
HOLDEN'S HERITAGE 60th ANNIVERSARY book LIMITED HISTORIC OPPORTUNITY. A truly remarkable opportunity to own a piece of Holden history. A clean out in a defunct Holden dealer discovered stocks of this...

MSRP:
Now: $80.00
Was:
Mike Spence was one of the most liked and respected drivers of grand prix racing in the 1960s. A loyal friend and team-mate of Jim Clark, Mike also raced for BRM and Emeryson in Formula One and in...