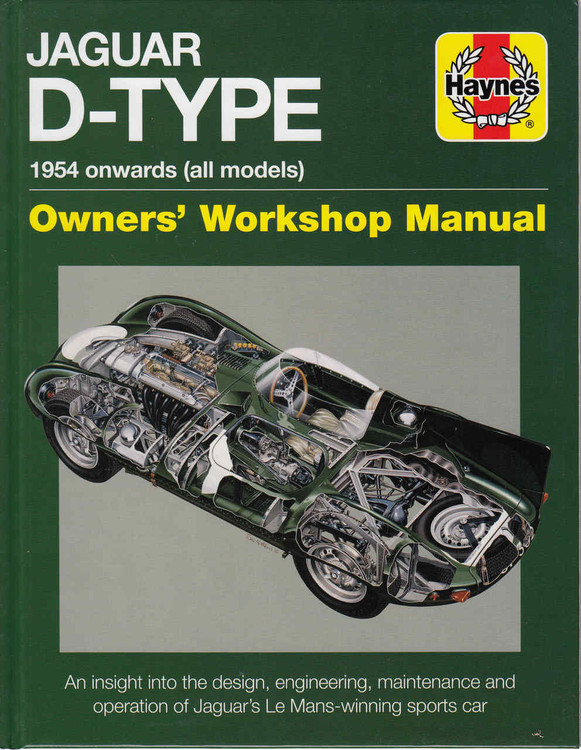 The D-type Jaguar was conceived with one specific purpose in mind - to win the prestigious Le Mans 24-Hour race, something which it accomplished on three consecutive occasions from 1955-57.

Not only was the car innovative and technically advanced for its time, with the use of aircraft-industry thinking and techniques, it was also a thing of beauty, with its aerodynamic oval cross-section and tail fin.

It was driven by some of the top names of the era, including Mike Hawthorn, Stirling Moss, Duncan Hamilton and Tony Ralt. Its competition career continues today in top historic events such as Le Mans Classic and the Goodwood Revival.

This manual details the origin and development of the D-type with the aid of numerous photographs and illustrations. It covers the history of the D-type's predecessors - the XK120 and the C-type Jaguar - along with its competition history, both for the works team and in private hands.

The full restoration of a D-type at the premises of CKL Developments is followed from the ground up, covering every aspect of the car's construction.

This in-depth study provides a fascinating insight into one of the most tonic sports racing oars of the 1950s and will appeal not only to fans of the marque, but to all motor sport enthusiasts.

• The D-type story The D-type's predecessors, the introduction of the D-type in 1954 and its subsequent competition history.

• Anatomy of the D-type Detailed photographs and description of the full rebuild of an original-specification D-type.

• The engineer's view 0-type experts such as Chris Keith-Lucas and Gary Pearson describe what made the car stand out from an engineering perspective.

• The driver's view Reminiscences from the memoirs of Jack Fairman and Paul Frere, together with thoughts from Nick Faure, Win Percy and Andy Wallace, among others.

• The owner's view Three fortunate owners describe why they chose to own a D-type.

• Individual chassis histories The competition history of the works D-types and other significant cars, as raced in period.

• Restoration and historic racing How a damaged chassis and other components were rescued and ultimately rebuilt into a genuine D-type.

Chas Parker swapped a career in astronomy, including contributions to Patrick Moore's Yearbook of Astronomy and the Philip's Astronomy Encyclopedia, to become a motorsport writer.

He spent seven years as sub-editor on Motorsport News, also reporting on events such as the Goodwood Revival and Festival of Speed.

He is the author of several books including comprehensive and acclaimed histories of Brands I latch, Silverstone and D-type Jaguar XKD 504.

MSRP:
Now: $49.95
Was:
An insight into the design, engineering and operation of Bugatti's iconic pre war grand prix car The Bugatti Type 35 is one of the most successful racing cars ever made. With its...

MSRP:
Now: $69.95
Was:
By: Jagaur Enthusiasts' Club . This was the first full-scale, detailed restoration story ever to be covered by the Jaguar Enthusiast's Club in Jagaur Enthusiast magazine. This book brings together...

MSRP:
Now: $24.50
Was:
By: Peter Crespin . The X300 was the first serious model development in collaboration with Ford and the cars benefited in quality terms as a result. Problems do exist, however, especially with the...

MSRP:
Now: $18.50
Was:
By: Peter Crespin . The XJ40 had a long development history and underwent sophisticated and thorough testing on several continents. Featuring an array of high-tech features such as a digital...