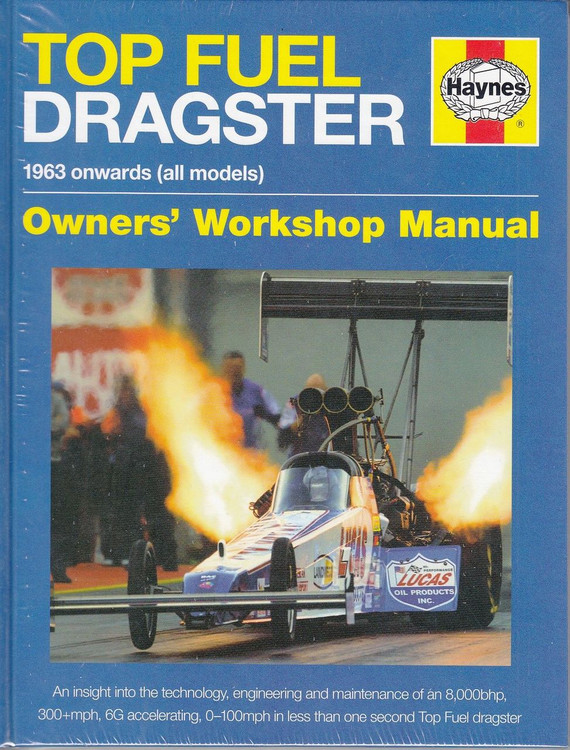 An insight into the technology, engineering and maintenance of an 8,000bhp, 300+mph, 6G accelerating; 0-100mph in less than one second Top Fuel dragster.

Top Fuel dragsters are the fastest racing cars on the planet. Powered by huge 8,000bhp nitro-burning engines, the quickest cars can accelerate from 0-100mph in less that a second, subjecting the driver to 6G acceleration, and reaching over 330mph by the end of a quarter-mile timed run. The noise and spectacle of a Top Fuel dragster in action is truly astonishing - a once-seen, never-forgotten experience.
This fascinating manual featues a wealth of 'under-theskin' photographs and explanatory illustrations, providing a unique insight into the engineering of these incredible machines, and takes a look behind the scenes from the perspective of the driver and team members to explain how the cars are designed, built, maintained and driven.
III The Top Fuel dragster story - the history and
evolution of drag racing in the US and Europe

Dan Welberry s a long-time drag racing fan, with a passion for the sport since childhood. He has built up an enviable reputation as a leading marketing and PR man in European Drag Racing. He and former four-time FIA European Top Fuel title-holder and record breaker Andy Carter teamed up in 2001, with Welberry taking on marketing, PR and sponsorship duties for the team. Away from racing Dan runs a design and marketing company.

MSRP:
Now: $39.95
Was:
1982 onwards (all models) An insight into the design, engineering, and operation of Porsche's World Championship, IMSA and Le Mans winning cars.  The Porsche 956 is the iconic...

MSRP:
Now: $39.95
Was:
By: Dr David Baker . Book Description NASA's Space Shuttle is unique in being the only winged manned spacecraft to achieve earth orbit and land back again, and the only reusable space vehicle...

MSRP:
Now: $59.99
Was:
By: Kevin Cameron . Almost three decades ago, a racing engineer named Kevin Cameron began writing a monthly column for the legendary Cycle magazine. When Cycle was incorporated into Cycle World in...

MSRP:
Now: $89.95
Was:
Author: Darwin Holmstrom, Photography by Randy Leffingwell, ISBN: 9780760345146, 224 pages, Hardback, colour illustrations. There will never be another time like the heyday of American automotive...