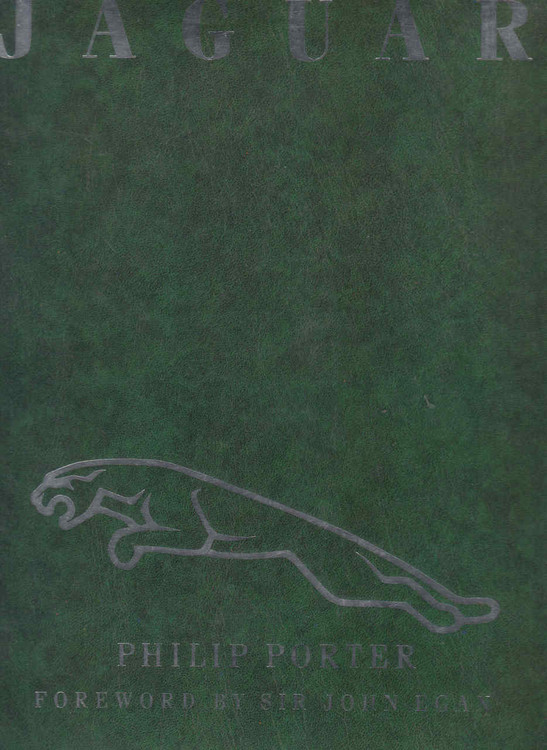 JAGUAR: HISTORY OF A CLASSIC MARQUE tells the story of one of the most exciting and innovative motor companies the auto industry has seen.

It is a story of unsurpassed engineering sophistication and design genius, of ambition and the unending struggle for automotive refinement.

That story begins in 1922 in a tiny garage producing just one motorcycle sidecar a week.

It includes the production of some of the most aristocratic and stylish pre-war sports cars; elegant saloons amid post-war austerity; the appearance in the 1950s of what many consider to be the ultimate sports racing car, in the unmistakable shape of the D-type; and of course the dazzling impact of the legendary E-type.

Fortunately for those who love cars, and even for those who simply love the happy marriage of technology and style, the story is far from over. The XJ6, the Sovereign and the top-of-therange Daimler have recently taken the motoring world by storm.

Each stage of this fascinating history is meticulously and enthusiastically charted in JAGUAR and illustrated with evocative images from the Jaguar company's own archives, previously unpublished, and many full-colour, specially commissioned photographs of the famous marque.

Comprehensive specification panels are provided for all models, along with readable explanations of all the engineering breakthroughs, from the revolutionary XK engine of 1948 to the intricate microelectronics of today's XJ40.

JAGUAR is enlivened by the authoritative contemporary comments of the people who shaped the company — the workers on the shop floor, the engineers, the directors, the image-makers — and the racing drivers.

A chapter is devoted to the Jaguar challenge on the track, battling with Alfa Romeo, Ferrari and Porsche at Le Mans, and Fords at VASA meetings across the United States.

The struggle for survival through the long night of the French 24-hour event is mirrored in the struggle for autonomy of the whole Jaguar concept during the 1970s and British Leyland nationalization.

This aspect of the story is also covered — the boardroom battles, the determination of the Jaguar team to reassert their reputation for refinement and reliability in a period of great upheaval and uncertainty.

JAGUAR: HISTORY OF A CLASSIC MARQUE presents a comprehensive analysis of a company, and a product, that have become synonymous with style and state-of-the-art auto technology, to delight and inform anyone who has ever fallen under the Jaguar spell.

PHILIP PORTER is a motoring journalist and author of wide-ranging interests and experience, but his greatest love has always been the Jaguar marque. He has been involved with Jaguar cars in so many ways: as a collector, in racing competiton, restoration, working for auto clubs, concours judging, historical research and of course writing.

He was a car enthusiast from an early age and began competitive motoring while still at school. In the early 1970s he began collecting older cars, particularly Jaguars.

Today his collection includes several historic XK's, a prototype E-type, the first production Fixed Head E-type and the twelfth open E. for a time he co-owned a restoration firm, the only one of its kind specializing in the E-type.

He was editor of the 'XK' magazine and later of 'Jaguar Driver'. His books so far include a short general history of Jaguar, a book on the XK 120's and 140's, and another on the XJ6. He is in close contact with past and present Jaguar employees, which lends his writing on the subject a greater immediacy and authority.

MSRP:
Now: $250.00
Was:
By: Nigel Thorley . The Jaguar brand epitomises the very best in British automobiles. It is a marque that has stood the test of time, from its humble beginnings in 1922 through to the present day as...

MSRP:
Now: $100.00
Was:
Media Jaguar.Com - Hardbound, 66 Pages - with CD-Rom "JAGUAR IS A FOUNDER MEMBER OF THE SPORTS CAR SEGMENT WITH A RICH SPORTING BLOODLINE STRETCHING OVER 75 YEARS, AND IN THE...

MSRP:
Now: $89.95
Was:
By: Jaguar World . Since its launch in 1961 the Jaguar E-Type has been top of the `wish list' for many a sports car lover. Nearly forty years on, enthusiasm for this icon of motoring history seems...

MSRP:
Now: $39.99
Was:
By: B11289B . Jaguar's small saloon car was introduced in 1955 to complement the company's successful sports cars and luxury saloons; it was the marque's first monocoque-bodied production car. The...

MSRP:
Now: $149.95
Was:
This book is published by Brooklands Books Limied and based upon tet and illustrations protected by copyright and first publi8shed in 1961 by Jaguar Cars Limeted. Reprint of the Original Factory...