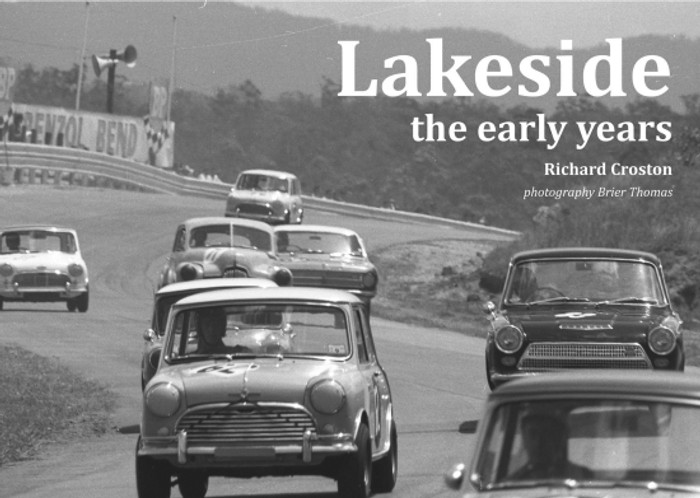 In 160 pages, Lakeside... the early years covers the first 10 years and captures some of the stories of Lakeside's motor racing enthusiasts, of how they developed this challenging track and engineered their cars to race and win.

'I have so many great memories of Lakeside. It's a fantastic track in a fantastic location.., the track rewards brave drivers but still gives committed drivers in slower cars a chance to win races. I just wish I was still racing there today!'
Dick Johnson

Built more than 50 years ago by enthusiastic young volunteers from the Queensland Motor Sporting Club, Lakeside circuit is now one of the world's classic racetracks. Fast and technically demanding, it has earned the respect of everyone who has ever raced there.

Among the famous champions who have battled wheel-to-wheel on its hilly, twisting bends are some of the finest racers of all time, including the great Jim Clark, the incomparable Jack Brabham and his close friend Bruce McLaren, Jackie Stewart and Graham Hill, Chris Amon, Denny Hulme and Jochen Rindt, Lorenzo Bandini and Piers Courage. Whether driving a Lotus, BRM, Brabham or Ferrari, they have thrilled generations of Australian enthusiasts at Lakeside.

The roll-call of Australian drivers at Lakeside is headed by local heroes Dick Johnson and John French along with the likes of Kevin Bartlett, Frank Matich, the Geoghegan brothers, Frank Gardiner and Glyn Scott. Their stories and many others are related in lively and engaging detail by Richard Croston who has selected nearly 300 images from the camera of acclaimed photographer Brier Thomas to accompany the text.

MSRP:
Now: $195.00
Was:
By: Peter Ross . Lotus The Early Years tells the story of what might be called the amateur years of Lotus, the days before Colin Chapman and Mike Costin gave up their day jobs and worked for Lotus...

MSRP:
Now: $125.00
Was:
By: Arnold Davey . The British firm of Lagonda, founded in 1899 by an American, Wilbur Gunn, became famous in the 1920s and 1930s for its range of exceptionally handsome and effective sporting cars...