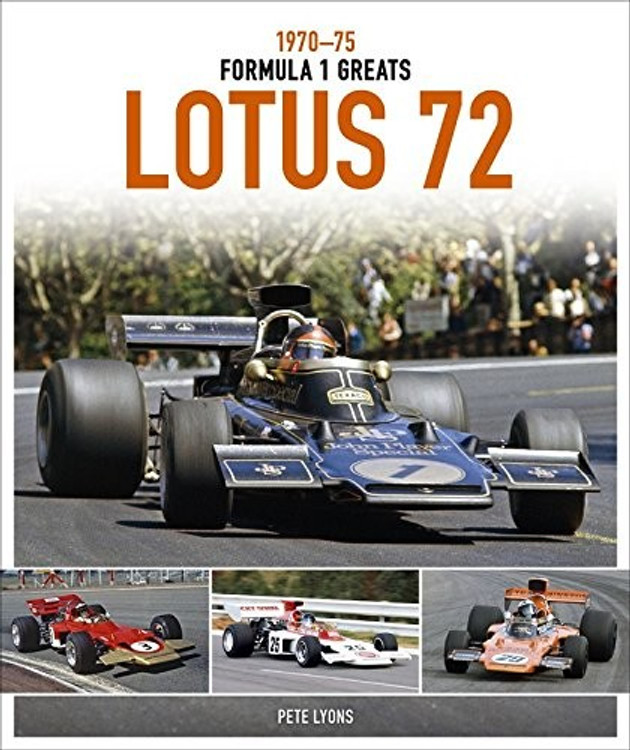 This book, the first in Evro's new Formula 1 Greats series, covers one of the most revered Formula 1 cars ever made. Introduced in 1970, the wedge-shaped Lotus 72 competed for six seasons, winning 20 World Championship Grands Prix, two Drivers' titles (for Jochen Rindt in 1970 and Emerson Fittipaldi in 1972) and three Constructors' titles (in 1970, 1972 and 1973), racing first in Lotus's evocative red, white and gold livery, then the equally eye-catching black and gold of the John Player Special period. Pete Lyons, Autosport's renowned Formula 1 reporter for part of the Lotus 72 era, explores the car's entire race-by-race career in his insightful commentary accompanying a magnificent array of more than 300 photos. The 1970 season: after troubled early development, the 72 finally took over from the long-serving 49, its four consecutive race wins enough to secure the World Championship for Jochen Rindt, posthumously after his death during practice for the Italian Grand Prix. The 1971 season: with promising youngster Emerson Fittipaldi elevated to team leader after Rindt's death, great things were expected of the 72's second season but it proved to be winless. The 1972 season: now in black and gold John Player livery, the 72 became far more competitive and Fittipaldi's four Grand Prix victories made him World Champion. The 1973 season: Ronnie 'SuperSwede' Peterson joined Fittipaldi to form a dream team and together they won seven races, but because Lotus's spoils were divided between the two drivers Jackie Stewart was able to come through to become World Champion. The 1974 season: still the 72 soldiered on, now as the fall-back car after its successor, the 76, failed to deliver; partnered by Jacky Ickx, Peterson won three Grands Prix. The 1975 season: well beyond its sell-by date, the 72 did a final season but by now it was far from effective, with Ickx's second place in the tragic Spanish Grand Prix its best result.

MSRP:
Now: $39.95
Was:
With innovative features such as inboard brakes, torsion-bar suspension, side-mounted radiators and wedge profile, the Lotus 72 set new standards in Formula 1 in 1970. It remained active for six...

MSRP:
Now: $39.95
Was:
The Ferrari Formula 1 single-seaters from 2010 to 2020, those of the post-Schumacher era, are the protagonists - together with drivers such as Raikkonen, Massa, Alonso and Vettel - of this calendar...

MSRP:
Now: $79.95
Was:
The untold story of Britain’s oldest car maker Many previously unpublished images from the vaults of Vauxhall A view from the inside that has been untold until now Of interest to the...

MSRP:
Now: $79.95
Was:
The original rally Quattro debuted in 1980, and was very much based on the road-car versions of the car, but with a highly tuned 300bhp engine. In 1981, Audi Quattro works driver Michele Mouton...