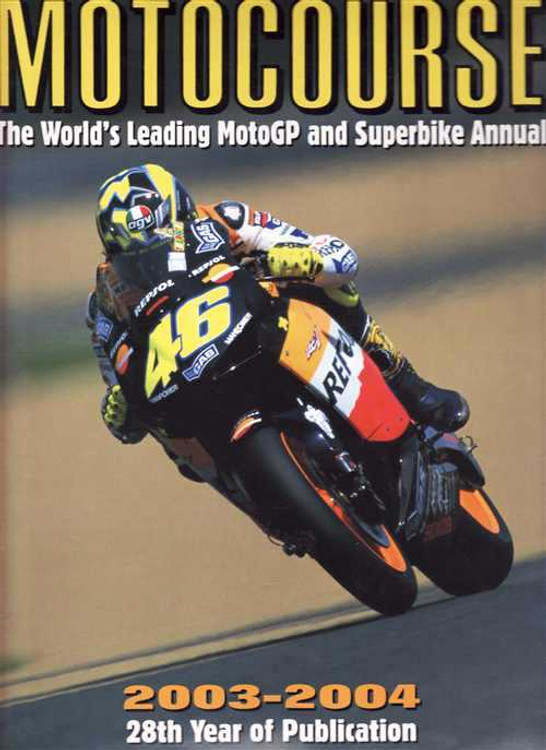 Motor cycle racing has never been better than it was in 2003. It has also seldom been worse, serial tragedy underscoring a year of true drama.

The Grand Prix series enjoyed record crowds, who were enthralled by some of the closest racing ever, as the big new four-strokes came back one year older and faster.

With the MotoGP ranks swollen by red Ducatis and lime green Kawasakis, Valentino Rossi had to ride harder than ever to secure his third title. Then, sensationally, the Italian superstar jumped ship!

First time World Champion Neil Hodgson brought the Superbike trophy back to its spiritual home in Britain. His record was beyond reproach, but the series had plunged into controversy by year's end.
In Britain and America, the national racing series were thriving. But the year was marred by two racing fatalities and the deaths of two more heroes. Not only did racing lose all time hero Barry Sheene, but also the TT was made tragic by the death of its fastest rider, David Jefferies.

Motocourse records the full drama of 2003 first hand. Its in depth reporting is illuminated by some of the best photographs in the world.

MSRP:
Now: NZD176.71
Was:
By: Icon Publishing Limited . Description Now in it's 35th year, Motocourse continues to go from strength to strength as the fortunes of MotoGP continue to flourish. Compiled by leading motorcycle...

MSRP:
Now: NZD143.57
Was:
MOTOCOURSE 2020-2021 celebrates its 45th year of publication - and despite the World pandemic throwing the sport into chaos, what a year it was for motorcycle racing! In a thrilling MotoGP season,...

MSRP:
Now: NZD165.66
Was:
By: Hazleton Publishing . The last year of the century saw momentous events in motor cycle racing. On the track, dominant five times 500cc champion Mick Doohan was eliminated in an early crash. And...

MSRP:
Now: NZD110.42
Was:
By: CMG Publishing . Motocourse is the respected independent record of everything that mattered to the sport. Full race reports and results are illuminated with incisive analysis and informative...

MSRP:
Now: NZD143.57
Was:
By: CMG Publishing . Charting the thrilling MotoGP and World Superbike Championships with detailed reports, complete results, statistics and much more. MOTOCOURSE is a superb blend of the very best...

MSRP:
Now: NZD99.38
Was:
By: Marco Masetti . During the preparation of the "Motociclismo tells..." series, dedicating a 'history' book to a comparative youngster like Aprilia struck some people as rather paradoxical. Aprilia...

MSRP:
Now: NZD132.52
Was:
By: CMG Publishing . Charting the thrilling MotoGP and World Superbike Championships with detailed reports, complete results, statistics and much more. Motocourse 2007/2008 is a superb blend of the...

MSRP:
Now: NZD143.57
Was:
By: CMG Publishing . Now in its 33rd year, Motocourse goes from strength to strength as the fortunes of MotoGP worldwide continue to flourish. Motocourse is not simply a lavish document of the MotoGP...

MSRP:
Now: NZD99.38
Was:
By: Mick Walker . The Bologna company ’s history goes back to the early 1920s and the MM factory, of which Alfonso Morini was a founding figure. In 1937, Morini struck out on his own and a new...

MSRP:
Now: NZD127.00
Was:
By: Icon Publishing Limited . MotoGP laid on an epic struggle in 2009, between two team-mates as the master Valentino Rossi and brilliant upstart Jorge Lorenzo slugged it out to a thrilling climax...

MSRP:
Now: NZD66.23
Was:
By: Brooklands Books . The small family business of Moto Morini first produced single cylinder racers and went on to introduce bikes with a modern revolutionary V-twin from the drawing board of...