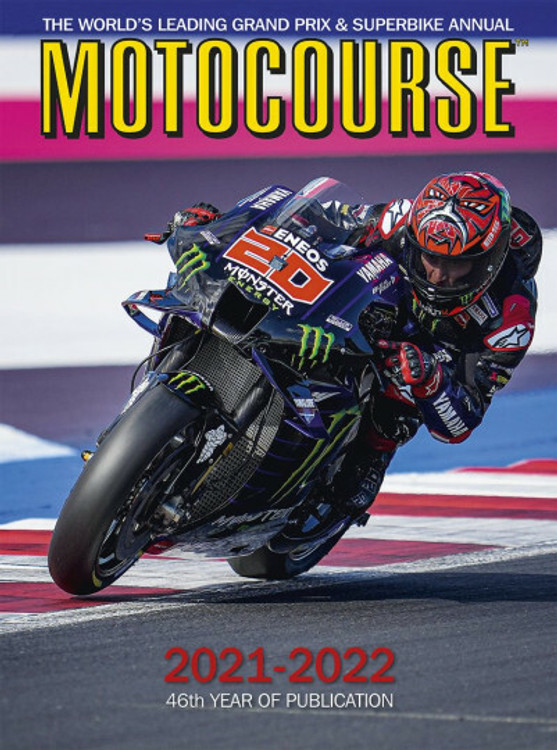 For lovers of two-wheeled motorsport, MOTOCOURSE stands alone as the leading yearbook covering the sport.

Since its launch in 1976 it has evolved through the decades into the most authoritative chronicle on the FIM motorcycling world and key national championships.

The 18-race MotoGP championship produced a fascinating mix of races which saw no fewer than eight different riders take victories in the first fourteen rounds, before the season climaxed in Valencia in November.

Leading the way was the young Frenchman Fabio Quartararo, who on his Yamaha, managed to keep a phalanx of Ducati riders at bay, led by Peco Bagnaia, Jack Miller and Jorge Martin.

Fascinating sub-stories abounded, with the triumphant return from injury by multiple champion Marc Marquez to win the German and US Grands Prix for Honda, and the strange melt-down by Yamaha’s Maverick Vinales who opened the season with a win in Qatar before an abrupt departure and swift re-appearance with Aprilia in mid-season.

2021 marked the last hurrah for the legend that is Valentino Rossi. “The Doctor” may have endured a low-key end to his illustrious MotoGP career, which has spanned an incredible twenty- six seasons, but his popularity around the world remains undiminished.

Aside from the premier class, Moto 2 and Moto3 are given ample coverage, with KTM’s championship chasing pair of Remy Gardner and Raul Fernandez battling for the top prize before graduating to the premier class. In Moto3 a new star was born in the shape of rookie Pedro Acosta, who at just seventeen years of age has already been earmarked for promotion after just one year.

Editor Michael Scott and Neil Morrison supply full reports on each Grand Prix, and Matt Birt brings us his usual run down on the comings and goings of each of the 11 squads in the Team-By-Team review, which has full personnel and technical specifications, the bikes being illustrated beautifully by Adrian Dean’s meticulously crafted drawings.

Full coverage is given of the 13-round World Superbike Series in which Kawasaki’s defending champion Jonathan Rea faced a stern challenge from Yamaha’s Toprak Razgatlioglu and Ducati’s Scott Redding. All the races and the seasons bikes and riders are put under the microscope by leading Superbike writer Gordon Ritchie who also covers the World Supersport class with Yamaha the dominant force.

Peter McLaren provides full race results and lap charts from every round of both MotoGP and World Superbikes as well as complete points table from all the major championships.

The well of talent that eventually will become the cream of racing almost inevitably springs from the amazingly well-conceived Red Bull Rookies series, in which youngsters vie for supremacy on identical machines. The vastly experienced Peter Clifford charts the ups and downs of their close-fought battles.

Sadly, because of the continuing pandemic, the Isle of Man TT and other road races did not take place for a second year in succession, but will return next year.

The increasingly popular BENNETTS British Superbike Championship continues to grow in prestige and stature, with an ever-deepening field of talent competing across eight different classes throughout a weekend packed with action. MOTOCOURSE is increasing its BSB coverage this year including the well supported Honda British Talent Cup and HEL Junior Supersport Championship’s where stars of the future develop their skills before progressing up through the ranks.

MOTOCOURSE also covers the racing in the USA, via the Moto America Superbike series which saw Yamaha’s Jake Gagne emerging as a convincing winner in the Superbike class and Sean Dylan Kelly an equally dominant champion in the Supersport class.

For 46 years, MOTOCOURSEhas been the bible of motorcycle racing, written and illustrated by the world’s leading practitioners. The superlative reproduction of its brilliant photography brings the drama and spectacle of a thrilling racing year to vibrant life.

MOTOCOURSE is the essential collectable, and the mainstay of every road racing fans bookshelf.

MSRP:
Now: $114.95
Was:
By: Icon Publishing Limited . MotoGP laid on an epic struggle in 2009, between two team-mates as the master Valentino Rossi and brilliant upstart Jorge Lorenzo slugged it out to a thrilling climax...

MSRP:
Now: $149.95
Was:
The AUTOCOURSE 2021 ANNUAL will be published as normal, however due to the later conclusion to this year's Formula One season, books cannot be despatched until after January 10th 2022. As next year's...

MSRP:
Now: $85.00
Was:
Porsche 356: The Engine Handbook: An Engine Assembly Guide The Porsche 356 Engine Assembly Handbook is a self guided tour through the unique engine that started it all for Porsche. Cole Scrogham...

MSRP:
Now: $85.00
Was:
The 914 and 914-6 Porsche, A Restorer’s Guide to Authenticity III takes a part-by-part, year-by-year approach to what an owner or prospective buyer should look for when evaluating a 914 Porsche...