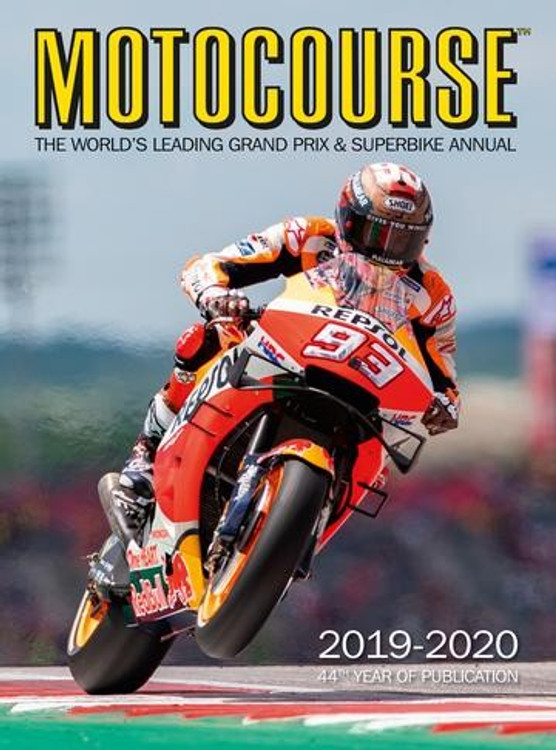 In a thrilling MotoGP season, Marc Marquez and Honda were again the dominant force, with customary brilliance, he romped to his sixth MotoGP title. Other riders occasionally denied the Spanish tyro. The Ducati pair of Andrea Dovizioso, and Danilo Petrucci, along with Yamaha’s Maverick Vinales and Suzuki’s Alex Rins all took to the top step of the podium in a close fought battle for supremecy throughout the whole of the MotoGP field.

Once again, Valentino Rossi defied the years to remain at the sharp end of the field, whilst the future for Yamaha may have emerged in the shape of the 20-year old French sensation Fabio Quartararo, eagerly seeking his first MotoGP win.

Editor Michael Scott provides a no-holds-barred assessment of all the aspects of a compelling season’s action.

MOTOCOURSE alone has full coverage of the support classes, Moto2 and Moto3, where Alex Marquez was looking to clinch the Moto2 crown at his fifth attempt, whilst Lorenzo Dalla Porta, Aaron Canet and Tony Arbolino hotly disputed the Moto3 title.

No book covers the motor cycle racing world in as much detail as MOTOCOURSE, which, in addition to the two major world series, reviews the unique challenge of Isle of Man TT races, The World Supersport Championship, The British Superbike Championship and the AMA USA Superbike series.

Incredible value for money, with 328 large-format pages, bursting with over 450 stunning colour photographs from the world’s finest photographers, MOTOCOURSE covers it all.

No wonder MOTOCOURSE is regarded worldwide as ‘The Bible of Motorcycle Racing’.