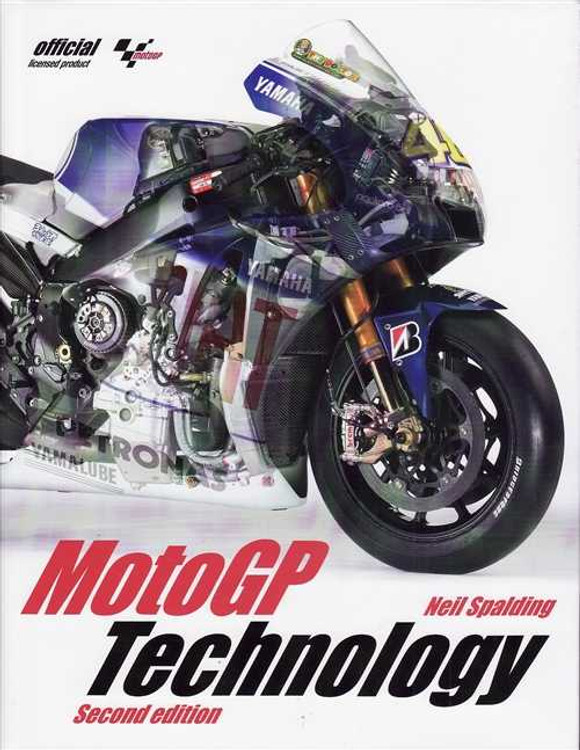 For years the top class of Grand Prix motorcycle racing was all about prototype 500cc two-strokes, but the need for bike manufacturers to develop four-stroke ideas led to the creation of the MotoGP Championship and a new breed of fire-breathing, 260bhp 990cc four-strokes. Starting in 2002, and always intended as the Formula One of motorcycling, MotoGP has seen the development of some of the most powerful motorcycles ever raced.

The bikes are prototypes: you will never see one on the road and the technology is amongst the highest being used in motorsport today. Providing new insight into the design of racing motorcycles, this book is a review and analysis of those bikes, the factories that made them, the teams that raced them and the technologies that have matured with them.

This is also the definitive technical history of the first eight years of the MotoGP class, both the earlier 990cc and, from 2007, the 800cc versions, from its initial muffled outings to the 200mph missiles now raced by, amongst others, Valentino Rossi, Jorge Lorenzo, Casey Stoner, Dani Pedrosa, Nicky Hayden, Marco Melandri and Loris Capirossi. The bikes reviewed are Honda's RC211V and RC212V, Yamaha's Ml, Ducati's Desmosedici, Suzuki's GSV-R and Kawasaki's ZX-RR, plus the bikes from Team Roberts, WCM, Aprilia, Moriwaki and Ilmor.

Author Neil Spalding has followed MotoGP for the last eight years, photographing the bikes in the pit lane and, using unrivalled access to all the development engineers and crew chiefs to gather information, recording their development race by race. Neil writes about MotoGP technology for a selection of magazines and newspapers throughout the world. In the UK he is the MotoGP technical specialist for MCN, provides a technical commentary during the Eurosport MotoGP broadcasts and each year writes the technical summary for Haynes's officially licensed MotoGP Season Review. A former club racer, he also runs Sigma Performance, a supplier of racing slipper clutches for motorcycles.

When not travelling the world, Neil can be found wandering the back roads of Kent and Sussex on one of his eclectic collection of motorcycles, which includes several Ducatis, a quite seriously tuned Multistrada, a Triumph T160 Trident and a Motobi 250.

MotoGP is the top class of Grand Prix motorcycle racing and, since it began in 2002, has seen the emergence of some of the most powerful bikes ever seen on the racetrack. Author Neil Spalding tells the inside story of the bikes in the MotoGP pit lane, describing in detail the teams' relentless efforts to gain the slightest technical advantage and shave a few fractions of a second off their lap times. Further chapters expose the important aspects of MotoGP technology, setting out clearly the advances and limitations of racing motorcycle design. With superb colour photographs and illustrations throughout, this book provides a fascinating insight into how the bike factories compete at the very top of the game.

MSRP:
Now: $149.95
Was:
2019 reprint with amendments MotoGP™ is the top class of Grand Prix motorcycle racing and, since it began in 2002, has seen the emergence of the most powerful bikes ever seen on the racetrack...

MSRP:
Now: $89.95
Was:
By: Graham Robson . Like the car itself, New Mini has proved a hot property, selling more than 7,000 copies - and Practical Classics termed the book 'excellent'. So much has happened since...

MSRP:
Now: $89.95
Was:
NEW BOOK still wrapped in plastic, however there is a small damage to the top right corner of the book, see the image.    The MotoGP manual of track riding skills - Author: Andy Ibbott,...

MSRP:
Now: $149.95
Was:
2019 reprint with amendments MotoGP™ is the top class of Grand Prix motorcycle racing and, since it began in 2002, has seen the emergence of the most powerful bikes ever seen on the racetrack...

MSRP:
Now: $149.95
Was:
By: Paul Veysey . The development of product placement in marketing is well illustrated. Why did the Mustang appear in so little publicity for Bullitt? Where was the Mini in most of the world's...

MSRP:
Now: $99.99
Was:
By: Rex Roy . The quest to uncover the automotive capital's most interesting dream garages prompted motorjournalist Rex Roy, a native Detroiter, to look in his own backyard. Once he plugged into the...

Motor Racing at Brands Hatch in the Eighties - Those Were The Days...

MSRP:
Now: $39.95
Was:
By: Chas Parker . By the start of the 1980s, the Brands Hatch motor racing circuit in Kent had become firmly established as one of the world’s classic tracks. It had grown from humble...

Motor Racing at Goodwood in the Sixties - Those Were The Days...

MSRP:
Now: $59.99
Was:
By: Tony Gardiner . Goodwood in the sixties epitomised all that was good about the British motor racing scene. It was a circuit where anybody could have a go, and yet the established greats like...