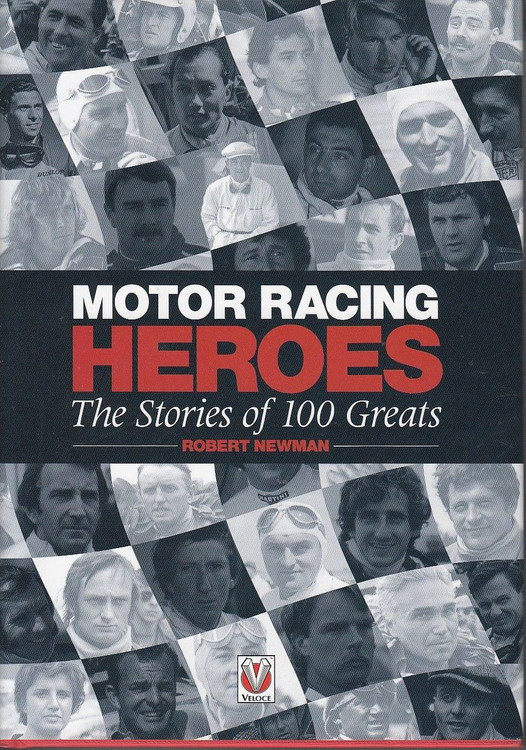 Covering almost 100 years of motor racing history, humanity, not simple statistics, is revealed here as the true source of the subjects' heroism. Take Andre Boillot; so tired at the end of the 1919 Targa Florio, he made a silly mistake, spinning his car backwards across the finish line - yet he still won. Or Grand Prix winners Robert Benoist, William Grover-Williams and Jean-Pierre Wimille, all of whom became French resistance fighters during WWII. There's David Purley's valiant attempt at
rescuing a trapped Roger Williamson by trying to overturn Willamson's blazing March with his bare hands during the 1973 Grand Prix of Holland. And Alessandro Zanardi, who lost both legs in a CART accident, yet still came back to win races.

There are so many heroes and heroines in this sport. This book is about 100 of them.

BORN IN ASHFORD, Kent, Robert Newman spent almost a decade in Melbourne, Australia, avidly following motor racing and the careers of his personal heroes, Juan Manuel Fangio and Stirling Moss, who were to become major participants in his life many years later.

Returning to the UK in 1955, Newman joined the Kentish Express as a reporter, and later acted as correspondent for The Times, Daily Mail, Daily Telegraph, the Evening Standard and Southern TV. Graduating from the National Council for the Training of Journalists scheme in 1959, he joined Pirelli's British subsidiary as its press officer, in 1965, where he worked with some of the great names of motor racing and rallying.

Newman became PR director of Pirelli's United States subsidiary in 1992, and continued his association with the stars of motor racing. He toured South Africa with Juan Manuel Fangio that same year, translating for the five times World Champion at special events and on television.

Newman retired to Italy in 1996, where he translates motor sport books from Italian into English for Giorgio Nada Editore, and writes a monthly column on motor racing drivers and famous cars for the American magazine Vintage Racecar Journal.

MSRP:
Now: $99.95
Was:
Picking up where the first volume left off, this is a photographic journey covering a period of ten years in motor sport. Moving year by year, this book is written from the perspective of a...

Motor Racing Circuits In England Then and Now

MSRP:
Now: $89.95
Was:
By: Peter Swinger . Author Peter Swinger has gathered together a fascinating selection of photographs and memorabilia to illustrate the changing face of motorsport circuits in Britain from the...

MSRP:
Now: $59.95
Was:
By: Peter McFadyen . A photographic record of motor racing at Oulton Park in the late 1960s when the circuit was host to world champions and club racers alike. Established names such as Clark,...

MSRP:
Now: $55.50
Was:
By: Anthony Carter . Description This book is a virtual time machine to the past. It presents stunning photographs from motor racing history, most previously unpublished, and examines the many facets...

MSRP:
Now: $29.95
Was:
By: Michael Webster . Motor scooters are commonly associated with just two manufacturers: Innocenti, who made the Lambretta, and Piaggio, who produced the Vespa. From the early 1950s these firms...