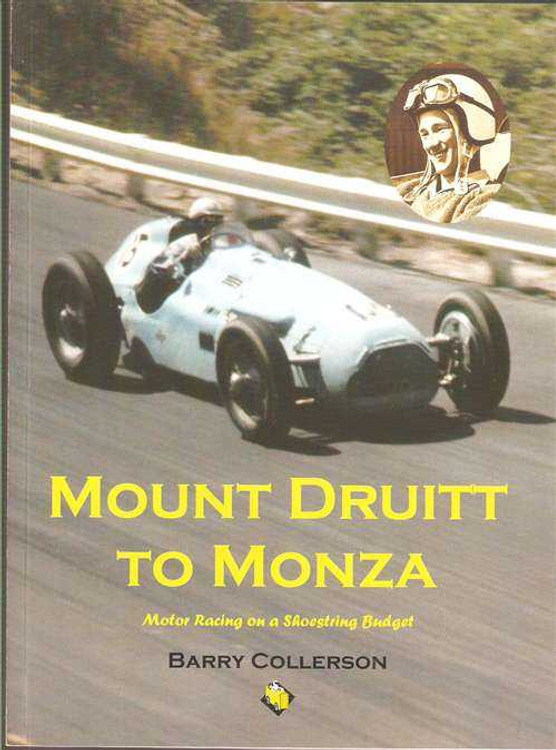 like new condition, however top right corner was bent, see the image

Every boy's dream is to go motor racing and try to be a world champion - and dreaming is generally where it stops!

Barry Collerson is one of the very few to have lived the dream and raced against the likes of Stirling Moss and Jack Brabham.

This autobiography will touch a nerve with every aspiring driver.

FOREWORD BY FRANK GARDNER:
THERE is a story told of the "Super Seniors Grand Prix", whereby the race is conducted at a different circuit each year and the format of each race is as follows: it takes place over three days, with a 22-lapper, a 31-lapper and a 28-lapper, and the Super Senior driver who can remember the venue and the number of laps completed over the three days is declared the winner.

I read Barry's manuscript and thoroughly enjoyed it and, with his attention to detail and his obvious powers of retention, I believe that, should that Grand Prix take place some time in this present era, I doubt very much that anyone else could hold out much hope of winning while ever Barry is around.

Barry's book mirrors the progress of many aspiring drivers of that era. In fact, the likes of Denny Hulme and one Frank Gardner led a similar kind of existence at one stage. We raced on many if not most of the tracks listed by Barry, and I recall with no fondness the constant battle for starting money that one endures.

The likelihood of a driver removing himself from this nomadic existence requires an element of luck combined with an ability to get the job done — the "job" being the skill to drive the motor car well and the "luck" factor being in the right place at the right time to talk to the right people. If you have a hard luck story, buy a Labrador puppy — it's said they are great listeners.

The book will provide great recall for many drivers who shared the era with Barry. They will find their races and contests well documented and recorded, and in that area, too, it becomes something of an official record of those events, but with a personal touch that often doesn't exist, even in the specialist press.

"Mt Druitt to Monza" is a good and appropriate title for this book, for it leaves us in no doubt as to its setting. It's a great read and touches on "what might have been" in the professional world of motor racing. Those who have tried to lift themselves into this professional world, and experienced the many pitfalls that go with it, will find special enjoyment as they ride along with Barry, meeting and racing with and against many very talented people who almost made it.

MSRP:
Now: $55.00
Was:
By: John Medley . Description John Snow was born to wealth, power and influence. Australian John Snow raced cars in Australia and Europe under the storm clouds of an approaching war. He won at...