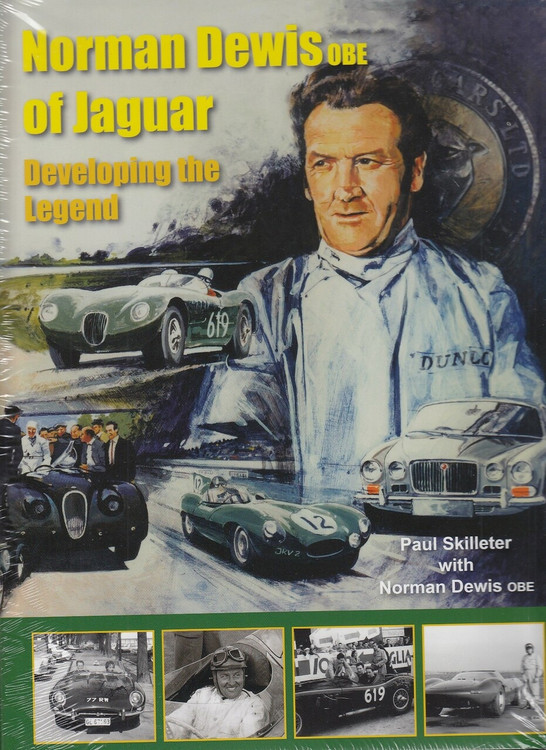 Norman Dewis began his 51-year career in the British motor industry at Humber and Armstrong-Siddeley, and then, after serving in the RAF during World War 2, he became chief tester at Lea-Francis.

Best-known for his 33 years with Jaguar, however, Norman joined the company in 1952 charged by chief engineer Bill Heynes with developing all competition and road Jaguars. He was a key element in the success of not only the Le Mans winning C- and D-types, but also a stream of truly remarkable production Jaguars.

These included the XK 140 and XK 150, 2.4, 3.4 and Mk 2 saloons, the iconic E-type and the original XJ saloon — hailed by no less than Sir Alec Issigonis as "the best car in the world.". Not only that, Norman also raced alongside the likes of Moss, Hawthorn and Fangio behind the wheel of a 190mph works D-type.

Yet all this was achieved despite an under-privileged childhood in Britain during the Depression and an education cut short at age 14 by the death of his father. That Norman Dewis became one of the world's most respected test development engineers was thanks to a very special talent for assessing the handling, steering and braking qualities of a car, an enormous capacity for hard work, outstanding organisational ability, and a terrier-like tenacity in achieving objectives with Jaguar's minimal resources.

This book is automatically also a development history of Jaguar, with a wealth of new technical details of how key models were evolved. Here the story draws both on Norman's remarkably precise memory and on the many thousands of documents from his own archives, augmented by data from the Jaguar Daimler Heritage Trust.
Norman did not, of course, work in isolation and his recollections bring to life the unique team which made Jaguar great — company founder Sir William Lyons, engineering director Bill Heynes, development engineer Bob Knight, aerodynamicist

Malcolm Sayer, and service department and race team manager Lofty England. These and many more become real people as Norman tells of his every-day involvement with them.

If anyone was at the heart of Jaguar during perhaps its most remarkable decades of achievement, it was Norman Dewis. Read this book and you will absorb the authentic flavour of Jaguar in Coventry and fully appreciate the achievements of a remarkable man.

This is a story both of personal achievement and of a heroic period in Jaguar's history. In a career spanning 33 years at Jaguar, Norman Dewis tested and developed a remarkable series of cars including:

Plus, he rode with Stirling Moss in a C-type in the 1952 Mille Miglia, drove a 190mph works D-type in the highly dramatic 1955 Le Mans, raced in the Goodwood 9 Hours, and set an amazing 173mph production car record at Jabbeke in Belgium with an XK 120. Completing over a million test miles at 100mph-plus average, Norman also played a crucial role developing the revolutionary Dunlop disc brake, and survived high-speed crashes and roll-overs in the days before seat-belts — and without ever breaking a single bone.

Filled with personal insights and fascinating technical detail, this book tells the unique story of a great Jaguar character and the equally great cars he worked with.

MSRP:
Now: $385.00
Was:
The book, numbering 350 pages, is prefaced with a foreword by Marek Reichman, Executive Vice President and Chief Creative Officer at Aston Martin Lagonda. Jonathan Wood has written this book as a...

MSRP:
Now: $150.00
Was:
Limited to maximum of 400 copies, Hardcover, published in 2021 Go back to the 1960s, where there were far fewer professional photographer opportunities available to record motorsport meetings. Teams...

MSRP:
Now: $149.99
Was:
By: Matt Stone, Luca Dal Monte . An Unconventional View of The World's Most Charismatic Cars For more than six decades no other name has inspired as much passion and excitement among car...

MSRP:
Now: $295.00
Was:
By: Tony Bailey, Paul Skilleter . Mike Hawthorn was horn in 1929 in a small south Yorkshire town, the son of an engineer whose passion happened to he motorcycles and motor sport. The family moved...