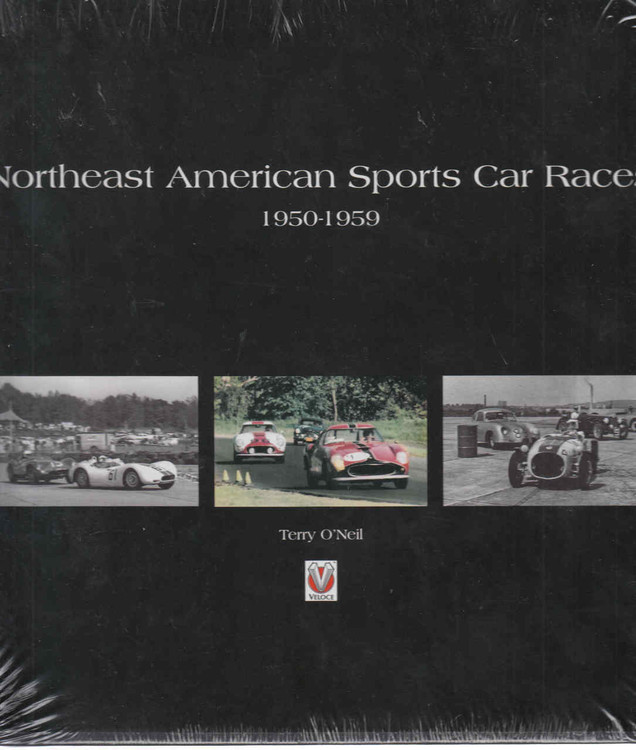 • Subject covered in great detail
• Diligent research has resulted in expansion and correction of recorded data
• Collection of rare images exemplifies the races of the era
• Many previously unpublished photos with descriptive captions
• Detailed year-by-year account of the races, their inception and demise
• Background to decisions made by race organisers and motor clubs
• Race programme covers included
• Near complete race results for every event
• Supplementary material used to illustrate the book
• Detailed information on the inception of various race tracks

This book focuses on the different aspects that contributed to the development of Northeast American sports car racing during the 1950s. The evolution from amateur drivers racing on public roads in 1950, to both professional and amateur drivers racing at private, purpose-built tracks in 1959, demanded huge leaps of faith, trust and understanding. The transition was neither easy nor uneventful for drivers, clubs or track owners, and the tragedy, politics and intrigue that came to characterise the period are covered here in fascinating detail.

The growth of sports car racing in Northeast America was not painless. Tragedy, mystery, subterfuge, intrigue, and an adherence to a particular club philosophy all featured in its story during the 1950s, when professionalism in the sport was always bubbling under the surface.
The northeast area of America has long been considered the cradle of post World War II sports car racing; the Sports Car Club of America was founded there, and it was the entry point to America for a host of European sports cars. Early in the 1950s, road races had been permitted by some State authorities, but due to fatal accidents a ban on such racing came into effect. Forced to find alternative venues, the motor clubs were attracted to civil airports and a few military bases. But the drivers craved more challenging venues on which to hone their skills. This resulted in a few individuals chancing their reputation – and a great deal of money – and opening purpose-built circuits.

This book gives a unique insight into this intriguing journey through the decade. Extensively researched, the compelling story and stunning contemporary photos, many previously unpublished, paint a fascinating portrait of a nascent sport coming into its own.Complaints from airmen alerted Congressman Errett Scrivner to potential irregularities, and he ordered an audit to be conducted to ascertain precisely what it was costing the air bases to host the races. His findings led to the cessation of the races, ordered by Congress.
The product of a long period of extensive research by the author, this book gives a fascinating insight into this two-year period, complemented by over 150 period pictures, many previously unpublished.

MSRP:
Now: $129.95
Was:
By Peter Higham The formative years of the 1950s are explored in this next instalment of Evro’s decade-by-decade series covering all Formula 1 cars and teams. When the World Championship was...

MSRP:
Now: $49.95
Was:
By: Jarrod Cotter, Maurice Hammond . Book Description Fast and manoeuvrable with an unprecedented long range, the North American P-51 Mustang made a late appearance in the Second World War. Fitted...

MSRP:
Now: $59.95
Was:
By: Brooklands Books . Description Introduced in 1999, the Noble M10 high-performance sports car was the brainchild of talented design engineer Lee Noble. However it was the iconic M12 which earned...

MSRP:
Now: $29.95
Was:
This new series from "After The Battle" is brought mainly for the avid reader and  "Then and Now" enthusiast who can keep a personal record whille visiting famous battlefields.