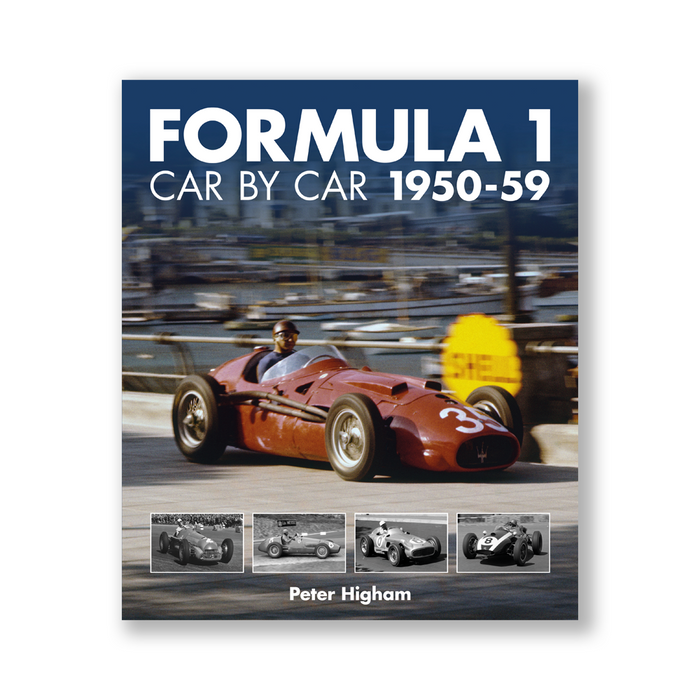 The formative years of the 1950s are explored in this next instalment of Evro’s decade-by-decade series covering all Formula 1 cars and teams. When the World Championship was first held in 1950, red Italian cars predominated, from Alfa Romeo, Ferrari and Maserati, and continued to do so for much of the period. But by the time the decade closed, green British cars were in their ascendancy, first Vanwall and then rear-engined Cooper playing the starring roles, and BRM and Lotus having walk-on parts. As for drivers, one stood out above the others, Argentine Juan Manuel Fangio becoming World Champion five times. Much of the fascination of this era also lies in its numerous privateers and also-rans, all of which receive their due coverage in this completist work.

TAKE RISK! The Amazing Story Of The People Who Made Richard Noble’s Extreme Projects Possible On Land, At Sea And In The Air

MSRP:
Now: $67.50
Was:
There’s an old saying we’ve all heard before that goes “When the top goes down the price goes up.” Of all the projects involved with the restoration of your collector car, few...

MSRP:
Now: $58.95
Was:
Discover the best factory and aftermarket parts combinations for your Chevy small-block engine using this well-researched data that will save you time and energy.In this revised edition of Chevrolet...

MSRP:
Now: $74.95
Was:
Be confident your Chevelle SS is as original as possible! Rarely does a book offer this much hard data in an easy and concise read.Make your Chevelle SS factory correct by identifying what was and...

MSRP:
Now: $59.95
Was:
Rebuild your Volkswagen's air-cooled engine with confidence and get your beloved boxer back on the road.How to Rebuild VW Air-Cooled Engines: 1961-2003 offers beautiful color photos with insightful...