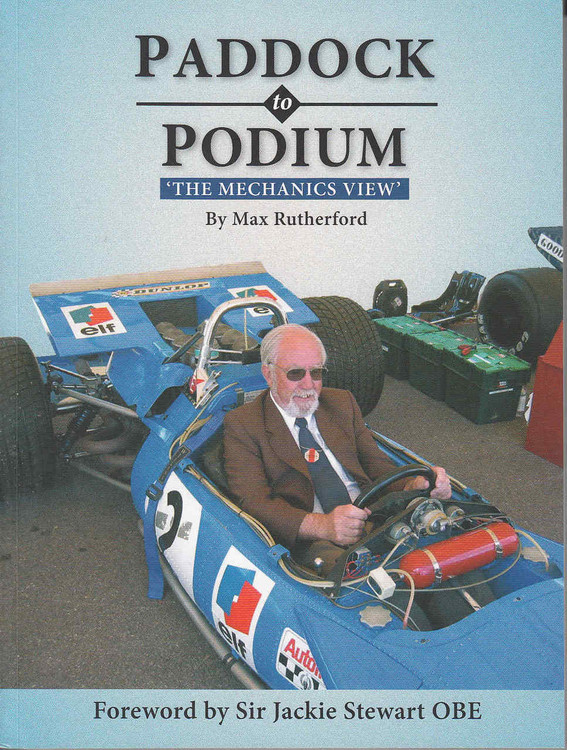 Next time you drive in wet weather, spare a thought to how your car copes with water on the road. Give the credit to motor racing, and a large helping of it to British Formula One driver Jackie Stewart, who went to a motor racing circuit in The Netherlands with dozens of new Dunlop development tyres and thoroughly tested them in wet conditions.

There to ensure it all went according to plan was Kiwi motor racing mechanic Max Rutherford, who with joint chief mechanic Roger Hill headed the team looking after Stewart's cars in the first season the Scot won the F1 world championship in 1969.

The tyre story is one of hundreds of insightful anecdotes Max tells about the world of motor racing in the 1960s as it entered the modern age, the days of legends like Stirling Moss, Jack Brabham, Stewart, Jochen Rindt, Chris Amon, Denny Hulme and Bruce McLaren.

Max Rutherford was mechanic to several and close quarters observer of them all. His experiences on the circuits of Europe, Britain and America culminated in an award he shared with Hill as the best motor racing mechanics in the world.

This extraordinary collection of photographs and precise narrative on what went on behind the public face of motor sport is a compelling read.

It begins with Max's early escapades as a speedway driver in the small New Zealand city of New Plymouth - days I recall as a kid whose father owned one of the cars - and tells of his meteoric rise to be mechanic to motor racing's champions.

CHAPTER 1.
About my family and my schooling.
Building and driving Go Karts and speedway cars and learning to drive fast. Building MiniMax.
CHAPTER 2.
The trip to England; a visit to the Pyramids of Egypt.
CHAPTER 3 —1965
Working for Jack Brabham building racing cars; a racing mechanic — I'm off to Monza and Monaco, and other exotic venues.
CHAPTER 4 —1966
The start of my employment with Charlie Chrighton Stuart.
Drivers I have ridden with (or name-dropping par excellence) How I met the London Bobbies.
The Pinner Road Hilton.
Dinner with Juan Fangio; the Argentine Temporada series, January 1966.
CHAPTER 5 —1967
I get 'hitched'
Jack Brabham, the 'racing mechanic' and my employer. An apology to Australians.
Transporter racing with Lotus and Tyrrell.
Aa tiny motorcycle with the ability to hurt.
CHAPTER 6 —1968
A step up the ladder — F2 to F I.
The Tyrrell Racing background.
1 get my hands and spanners on a real Fl racing car.
A trip to Paris in the snow.
A big surprise in the Principality of Monaco.
Nearly a major disaster.
I create a storm that was written about in motoring magazines. Ttyre testing and nasty snakes in Kyalami.
CHAPTER 7 —1969
Monte Carlo or Monaco; always a major race meeting under either name. We race at Monza but before that I suffer a froth job.
We head for the country that invented Montezuma's revenge.
CHAPTER 8.
I discover there is a life after Formula One; the Tasman Race Series in New Zealand.
On being a celebrity and cashing in.
More cars since retirement, including proper racing cars (very old) Further notes about my life.

Not enough professional racing drivers fully appreciate the crucial part mechanics and engineers play towards the success they dream of, and in some cases achieve.

During my Formula One career - particularly with Ken Tyrrell - I enjoyed the privilege of having some of the very best mechanics there have ever been in motorsport. In speeches I give, I'm often heard to say that themechanics and engineers who looked after me were better at what they did than I ever was at what I did.

Max Rutherford - a New Zealander the same as Roger Hill, who worked on my car as well - is such a person. It's fortunate he was recognised and chosen by Ken Tyrrell to work with Tyrrell International on the Matra MS10 Ford in which I finished second during the 1968 World Championship, and then the MS80 Matra Ford in which won the 1969 title.

During the following years, people like Roy Topp, Roland Law, Neil Davis and many others allowed me to have a considerable number of wins that brought me the World Championships in 1971 and 1973.
Without them and the support team that Ken created, with his skills of recognising the right folk to put into the right job, Jackie Stewart probably would not be here today.
To finish first, first you must finish. To do that, you have got to have reliable, safe and well-prepared racing cars. Of course, they have to be designed correctly in the first place, but it's often the mechanics working on these cars who see potential flaws or potential downside risks, which can be altered, adjusted or remanufactured.

That gives the kind of reliability that allows you to get to the finish line without the mechanical breakages that so many compatriots of my era suffered. Unfortunately, many of them died because of those failures, while I never drew blood from my body driving a racing car.

Max Rutherford has worked hard to create this book. The publishing industry nowadays is only really looking for big sellers, for a fast return on their investments. Therefore, Max has had to pour in his own money to make this book happen.
He hasn't gone to a ghost writer, who would have perhaps made it more commercially appealing, polished, and perhaps universally read; he's done it himself. The story he tells, however, is one that will resonate among the huge army of motor racing mechanics and enthusiasts in every category of the sport.

Max has had experience in grass roots motorsport and experience of driving and competing himself - even building his own cars - as well as working in the glamorous, colourful and exciting world of Formula One, which today is a huge, global industry and sport.

New Zealand has been responsible for a great number of top-line engineers, who have brought a good many racing drivers to the top of their profession through driving cars that have been impeccably prepared, and in some cases re-engineered, to produce not only performance but reliability and the knowledge and experience of the hands-on mechanics/ engineers.

Max didn't stay a long time in the Matra / Ken Tyrrell period, but while he was there he provided a major contribution to the success we all achieved. He went back to New Zealand and created a new life for himself in different spheres of business and again enjoyed another era of success in his lifetime.

However, he has never forgotten the dramas, the excitement and the fulfilment he worked so hard for, when your car, your team and your driver reaches the pinnacle of success in the world of Formula One Grand Prix racing.

The respect I have for Max and the team that he worked with is of the very highest level of anything that I can identify in my life. I'm sure much of that will be appreciated by the readers of Max's book.

To Max, I say a big thank you for all you did for me, Ken Tyrrell and the rest of that small, but remarkable, group of people, who worked together to make it happen in a safe and successful fashion.

The Other Bentley Boys -Signed by Author

MSRP:
Now: $299.95
Was:
By: Robert J. Neal . Description The author was first struck with the idea of producing a work devoted solely to the story of the involvement of Packard built power in the performance of various...