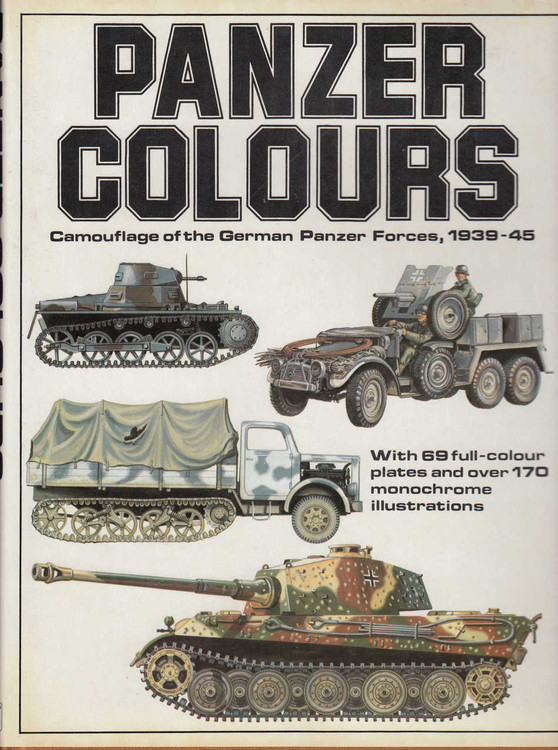 Camouflage of the German Panzer Forces, 1939-45

German camouflage in World War Two was the most highly developed and the most diverse of all the belligerent powers. During the war, several unique colour schemes evolved, culminating in the 1943-45 three-colour type—the most sophisticated camouflage system yet devised.

With 69 colour illustrations and over 170 black-and-white photographs, Panzer Colours presents the most comprehensive and detailed account of German armour camouflage in World War Two yet published. Besides covering the colour schemes, their evolution and variations, it also describes interior colours, methods of application, weathering and the uses of foliage—all essential reference material for wargamers, modellers, and military vehicle enthusiasts.

Lack of supplies, lack of time or proper painting facilities, and later the deteriorating military situation from 1943 to 1945, contributed to a number of deviations from the standing order concerning the painting of German military equipment.

Much leeway was given to commanders in deciding on suitable camouflage colours and schemes—indeed, the choice of additional colours in the 1943-45 system was left entirely to field commanders! Variations in methods of application, materials, and the differences in "artistic ability" in painting the vehicles (most usually by the individual crews) produced a nearly infinite range of colours and patterns, using the standard German colours.

This book has been written to present, as completely as possible, the history of German comouflage practices in World War Two. A number of articles have appeared on this subject, but most have been incomplete; and many have introduced a great deal of speculation, losing the official basic orders in a welter of conflicting, contradictory deviations, some based on single photographs.

Fortunately, a great deal of excellent material—many hundreds of clear photographs, articles and books, and interviews with museum personnel, and U.S. and German World War Two veterans—has become available, and was used in the preparation of this work, which covers the complete history of the official German Army camouflage directives as well as a number of significant well documented deviations.

Brief surveys of World War One German camouflage colours and schemes employed by the post-war Reichswehr have been included because these systems were the foundation of the World War Two colours. And recently, the U.S. Army has begun using new camouflage schemes with colours similar to the later World War Two German paints.

Companion volume:
Lavishly illustrated in colour and in black and white, Panzer Colours 2 explains and describes the markings of the German panzer forces in World War Two—with the same completeness and accuracy:
• National Insignia
• Vehicle Numbers
• Divisional Signs
• Tactical Signs
• Licence Plates
• Service Markings
• Victory Markings
• Command and Rank Pennants
• Vehicle Names
• Award Shields and Crest
With the co-operation of a number of German veterans groups, Bruce Culver has researched deeply to obtain as accurate a coverage of German vehicle markings as is possible today; in doing so, he has been able to correct many popular misconceptions, and to identify a considerable number of previously unknown insignia. To back up the detailed text, he has selected over 180 photographs—and Don Greer has contributed a further 82 full-colour paintings—showing specific vehicle markings. There are also 5 line drawings of divisional markings, 3 demonstrating the organization of vehicle numbering and 7 charts displaying more than 160 tactical signs. And, in full colour, there are over 150 paintings of insignia, numbers, pennants and symbols.

Panzers In Normandy - Then and Now

MSRP:
Now: $129.95
Was:
Initially published to commemorate the Fortieth Anniversary of the Normany campaign, this book fully realises the excellent opportunity offered the reader to revisit those brilliant defensive battles...

Panzer Colours 3 Camouflage and Markings of the German Panzer Forces, 1939-45

Panzer Colours 3 Camouflage and Markings of the German Panzer Forces, 1939-45

Pegaso and Ricart - From Hispano-Suiza to Pegaso; trucks, buses and sportscars

MSRP: $189.95
Now: $95.00
Was:
By: Luigi Barzini . Introduction to the 100th Anniversary Edition Luigi Barzini wrote Peking to Paris, An Account of Prince Borghese's Journey Across Two Continents in a Motor-Car in 1907,...