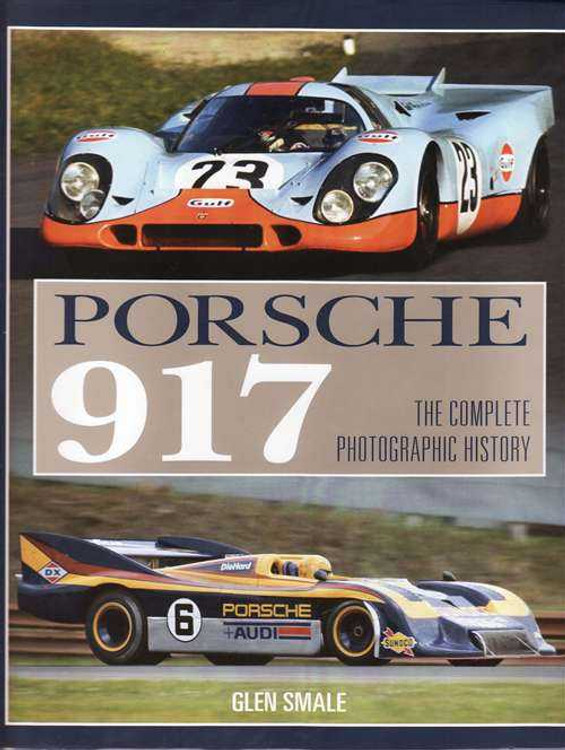 Over a period of just four years, 1970-1973, the Porsche 917 became one of the most loved and, at the same time, most feared sports cars in the history of motor racing. This remarkable new book, published to mark the 917's 40th anniversary, celebrates this motor racing legend by presenting a superb compilation of over 900 photographs, accompanied by detailed narrative.

For years, Porsche had achieved numerous class victories with their 904/906/907/908 and 910 'plastic racers', but all too frequently the Stuttgart engineers watched their fast but ultimately underpowered sports cars only pick up the lower positions in the big league. An ambitious and brilliant engineer with a wealth of experience, Ferdinand Piech, decided to change that and set his sights on victory at Le Mans.

Although the 917 romped away with 14 race wins in its first two seasons (1970 and 1971) in the World Championship for Manufacturers, this domination nearly didn't happen at all. The 917 had one of the shortest gestation periods of any race car: just seven short, frantic months passed between the time of the project's approval and the unveiling of the first model at the Geneva Motor Show in March 1969. This superfast development schedule almost proved to be the car's undoing, but against the odds the 917 recorded its first tentative victory at the Osterreichring in August 1969.

The 1971 season was the last year in which the 917 was eligible for the World Championship, but the 917/10 and 917/30 would claim many more victories in the European Interserie and Can-Am Championships in 1972 and 1973. Capable of producing up to 1500bhp, the 917/30 was untouchable and to this day remains the most powerfill sports racing car ever to compete on a closed circuit.

Glen Smale is a lifelong motoring and motorsport enthusiast whose writing includes magazine features, books and automotive marketing. A graduate of Rhodes University in South Africa, he is the founder of Automotive Research, a specialist motoring and motorsport resource, serving the motor industry and related media. He is the author of Porsche: The Carrera Dynasty and the award-winning jaguar E-type: Portrait of a Design Icon, both published by Haynes.

MSRP:
Now: NZD325.12
Was:
The Porsche 956 and its derivative, the 962, have gone down in history as the most successful prototype sports racers ever, winning numerous races and championship titles during the 1980s and even...

MSRP:
Now: NZD108.34
Was:
By: Jonathan Falconer . Description She flies, she flies!' was the ecstatic shout from BBC commentator Raymond Baxter when he witnessed Concorde 001 take off from Toulouse on her maiden...

MSRP:
Now: NZD216.73
Was:
By: Gordon Wingrove . Hailed by many as the greatest racing car of all time, the 917 story is packed with superlatives. It began with an incredible display of 25 complete cars to achieve...

Porsche 917 - The Heroes, the Victories, the Myth

MSRP:
Now: NZD216.73
Was:
By: Jorg Fodishc, Jost Neshover . New chapters, new pictures and new background stories. This second edition of the successful book "Porsche 917 -The Heros, the Victory, the Myth" is an even more...

MSRP:
Now: NZD319.75
Was:
By: Peter Morgan . This is the compelling story of the Porsche 917, acclaimed as the greatest racing car of all time in an expert poll conducted by Motor Sport magazine in 1997. Fuelled by bitter...

MSRP:
Now: NZD216.73
Was:
By: Gordon Wingrove . Hailed by many as the greatest racing car of all time, the 917 story is packed with superlatives. It began with an incredible display of 25 complete cars to achieve...

MSRP:
Now: NZD211.36
Was:
Forty years in the history of the Porsche 917-021 described by an enthralling investigation that includes a journey to the heart of deepest Germany, trips to Stuttgart and Hamburg as well as the...