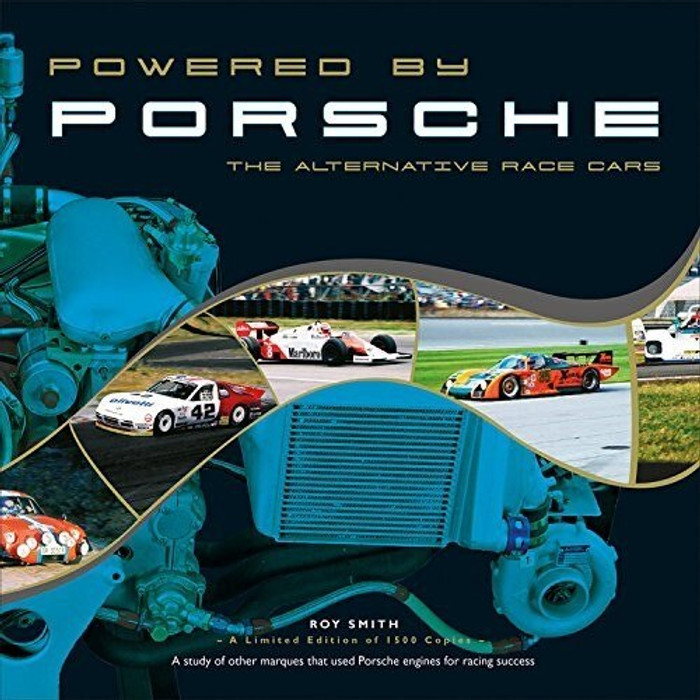 A study of other marques that used Porsche engines for racing success.

Powered by Porsche the Alternative Race Cars is a detailed account of the racing cars that were powered by Porsche engines, but where the chassis and development of the car was carried out by others. The Porsche company in Zuffenhausen, Germany, can probably be said to be the most successful marque ever for victories in the motor racing scene. Likewise many firsts in innovation have come with the name Porsche attached. Then there are the builders of racing cars, some major producers, such as Elva, Lotus, Lola, March, all at some time featured a Porsche engine in their chassis. In the late 1970s and into the 1980s, the demand for the services and supply of cars, chassis, and parts from Porsche, outstripped their ability to deliver. Plus with many new projects in the rapidly expanding Porsche organisation, race car projects had to be prioritised. This would lead to the creation of the replicas, as opposed to the factory built works race cars, even Porsche was building replica 935s to supply to clients, this was to continue into the 962 era. In turn a whole new highly specialised high quality industry grew up to meet the demand for Porsche-powered racers. In this book we see the racing cars, the teams and the people who turned to Porsche to utilise the power from, perhaps, the greatest of all engine makers. This is thought to be first book on the subject, covering the entire history of Porsche engines, detailed engine specifications, non-Porsche chassis, and race details, as well as team history with anecdotes from drivers. It is illustrated with many previously unpublished photos, and provides fascinating reading for the enthusiast and newcomer alike.

MSRP:
Now: NZD307.27
Was:
By: Philip Carney, Jacques Mertens . Description The title of this book, The Last Eleven, refers to the last eleven aluminum 356s. The chassis for these cars were built in Gmund and they were...

MSRP:
Now: NZD62.44
Was:
By: Porsche Museum . Description Smart design solutions, pioneering technology and classic vehicles all come together at the new Porsche Museum at Stuttgart-Zuffenhausen. Housed at Porsche's...

MSRP:
Now: NZD98.95
Was:
By: Peter Vann . The long career of the Porsche Turbo started during the first oil crisis, at a time when public opinion was almost ready to accept that fast, powerful cars would have no further...

Preparing the Yamaha YZ and IT for Competition

MSRP:
Now: NZD62.44
Was:
By: Larry Davis . In many ways, drag racing spawned the muscle car era of the ‘60s. Super Stock drag racing was huge in the early ‘60s, and the factories encouraged their teams’...