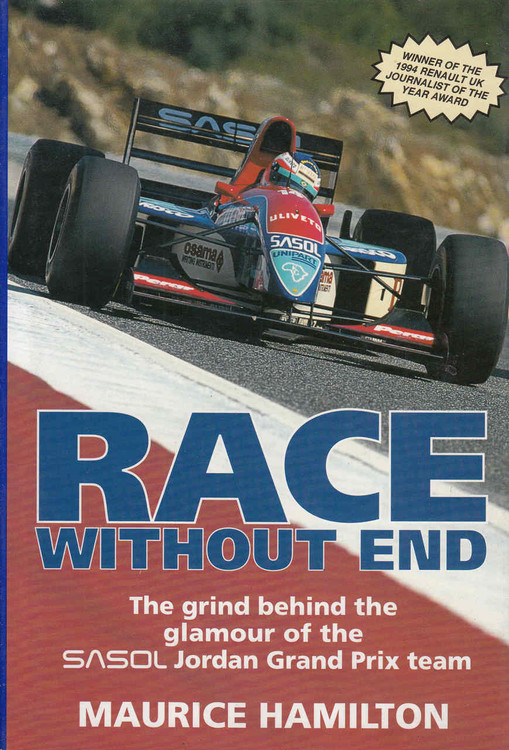 This story has much to do with the glamour of Grand Prix racing. But it is not about winning — or about losing. It recounts the pain and the sweat associated with surviving in a business which costs millions to simply fight another day.

Jordan Grand Prix is a small but integral part of an elite group of Formula 1 teams travelling the world, racing 16 times a year, working flat out in between, day in, day out. There can only be one winner at each race and, in 1993, that honour was regularly shared between just two of those teams, with another two having but a slim chance of success.

Jordan earned an unexpected share of the headlines in Japan when their novice driver, Eddie Irvine, dared to challenge the triple world champion Ayrton Senna, and received a cuff round the ear for his trouble. The altercation, widely reported by the world's press, is covered in detail in this book. The team was again in the headlines after the opening race of the 1994 Grand Prix season in Brazil, when Irvine's involvement in a dramatic four-car crash earned him a three-race suspension. But Jordan more than made up for that with a brilliant third place for Rubens Barrichello in the Pacific Grand Prix.

The 1993 season forms the framework of the book as the author, with privileged and unique inside information, follows the fortunes of the Sasol Jordan Hart, from conception through evolution to resolution not to be beaten again. Each chapter is woven around one particular aspect of the team. He reveals precisely what makes Jordan tick while, flyon-the-wall style, portraying the frustration and the elation, the grind and the glamour of this race without end.

Maurice Hamilton, motorsport correspondent of The Observer and commentator on BBC Radio 5 Live, has been covering Grand Prix racing since 1977. This is his third book on Formula 1, the first, British Grand Prix, having been reprinted twice. Nigel Snowdon and his wife Diana Burnett each bring more than 20 years of Formula 1 experience to the photographs, taken exclusively for this book.

MSRP:
Now: $80.00
Was:
By: Michael Cooper, Paul Parker . Any driver, team manager, mechanic, marshal or spectator at Grands Prix, sports car races and other major motor racing events in Britain and Europe will have seen...