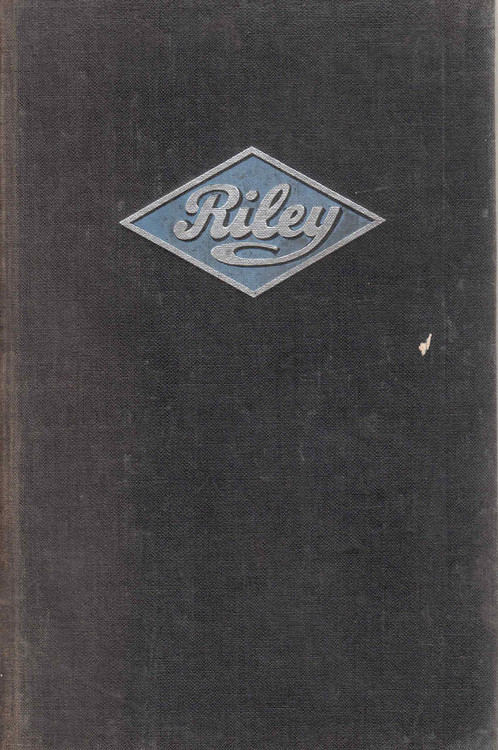 This book has been produced for Members of The Clan Riley who may own a model made during the years 1930 to 1956. It does not set out to be a comprehensive workshop manual, but it has been written by enthusiasts in the hope that it will provide useful help and some interesting facts.
1930 may seem a long way back to some of you but there are, in fact, many excellently preserved Rileys on the road to-day that were manufactured several years earlier still.

The first Riley ever, was designed and produced during the years 1896-1898 and the marque has pioneered many developments since those days. From the very first the car was designed to appeal to the discriminating few and has never attempted to meet popular demands. The" Clan Riley" has developed and become a very real factor in motoring history during the past fifty years.

Thus, in the very earliest days the Riley Company had rendered the British Automobile World a service, the value of which it is difficult to estimate to-day.

MSRP:
Now: $85.00
Was:
A portfolio of international articles drawn from three continents trace the development of the Riley RM series between 1945 & 1959. Models reported on include the RMA, RMB, RMC, RMD, RME, RMF,...

MSRP:
Now: $149.95
Was:
By: AT Brimingham, 2nd hand book in excellent condition. This is the record of the original Riley Motor Company and its wide range of beautifully made pre-war motor cars. There can be few cars better...

MSRP: $59.95
Now: $39.95
Was: $59.95
By: Brooklands Books . This series of books covers the best of the American magazine has to offer on performance cars. There are road and comparison tests, specification and technical data, new model...

MSRP:
Now: $150.00
Was:
By: David G. Styles .**RARE FIRST EDITION IN EXCELLENT CONDITION** When first published in 1982, this book was acclaimed by the motoring press as: "...an exceedingly welcome and very worthwhile...

Riley - Beyond The Blue Diamond

MSRP:
Now: $49.95
Was:
By: Brooklands Books . Audi built its first car in 1909 and joined with Horch, Wanderer and DKW to form Auto Union who was responsible for the grand prix cars. By 1970, when the cars were first...