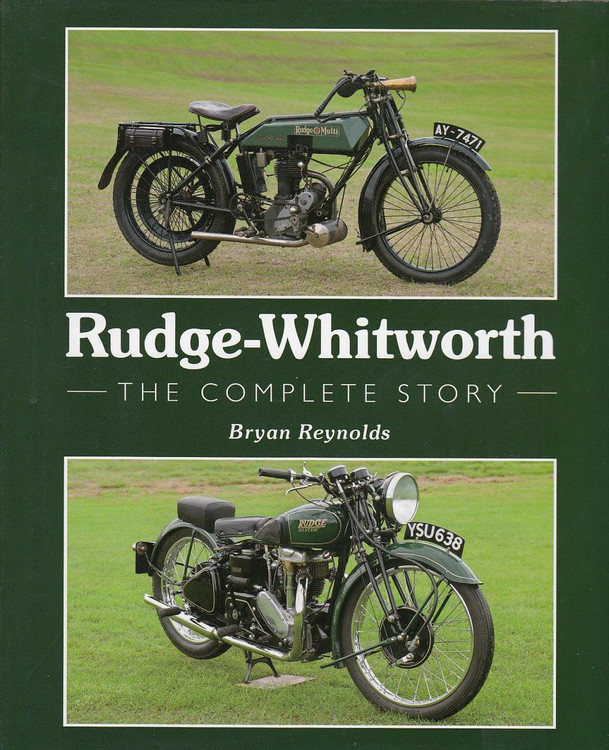 Rudge-Whitworth — The Complete Story charts the history and development of one of the world's largest cycle and motorcycle manufacturers in the early twentieth century. Daniel Rudge founded the company in the 1860s, on his return to Wolverhampton from the army. With innovative ideas about cycle mobility and adjustable bearings, he helped to create the cycle industry and put Rudge bicycles on the map. After a merger with the Pugh family's Whitworth cycle business, the Rudge-Whitworth company was formed, soon becoming the largest cycle and tricycle company in the world. In 1909 the company expanded into motorcycle production, and this book cov6rs the period from the first motorcycle prototype in 1910 to the end of production during the World War II and subsequent developments.

The company used the resilient single-cylinder 'F'- head engines in their motorcycles, which suited the poor grades of metals available at the time. In 1912 the Multi gear engine was invented, which linked expanding and contracting belt rims, and it was a Rudge Multi model that led to Cyril Pullin winning the Isle of Man IT in 1914. Whilst the Multi gear stood Rudge-Whitworth in good stead, it was the Rudge Four' engine design that put the company ahead of its competitors after the post-war slump. The design incorporated four parallel valves per cylinder, and led to many racing successes.

From 1930, in an effort to boost declining sales, the engines, clutches and gearboxes were offered to other manufacturers under the name of 'Python'. In the early 1930s over three dozen firms used Python equipment for their racing machines and general sales. Notably, Enzo Ferrari used Rudge machines in his Scuderia Ferrari to win many races and claim Italian championships.

However, these sales could not save the RudgeWhitworth company, which was eventually taken over by EMI in the late 1930s. During the World War II production ceased, and the Rudge name was sold to the Raleigh Cycle Company, to end what had been an eventful period of production. Over two thousand Rudge machines are still in existence, and are still being enjoyed by their owners today.

With original colour photographs and comprehensive specification guides from the factory brochures, Rudge-Whitworth — The Complete Story tracks the history of the company's motorcycle development and innovations in engine design. The sales motto of the company, Rudge it, don't trudge it', gives a clue to the remarkable story of a firm whose motorcycles were amongst the fastest in production, leading to racing success at the Isle of Man IT and elsewhere.

MSRP:
Now: $89.95
Was:
By: David G. Styles . Little has been written and published about the remarkable Volvo 1800 series of sports cars. The P1800, as it started life, was remarkable in many ways. It was destined to be so...

MSRP:
Now: $89.95
Was:
By: Mick Walker . NSU (Neckarsulmer Stricken Union) was not only one of the real pioneers of the German car, motorcycle and bicycle industries, but also enjoyed over a century of production,...

MSRP:
Now: $99.95
Was:
By: Bruce Preston . BMW has one of, the most interesting histories in motoring, from its early days as an aero engine manufacturer to road transport when the BMW car and motorcycle have been vital...

MSRP:
Now: $129.95
Was:
By: Peter Miller . Book Description George Brough gained his love of motorcycles from his father, William, a pioneering motorcycle rider and manufacturer. William's machines were of high quality, but...