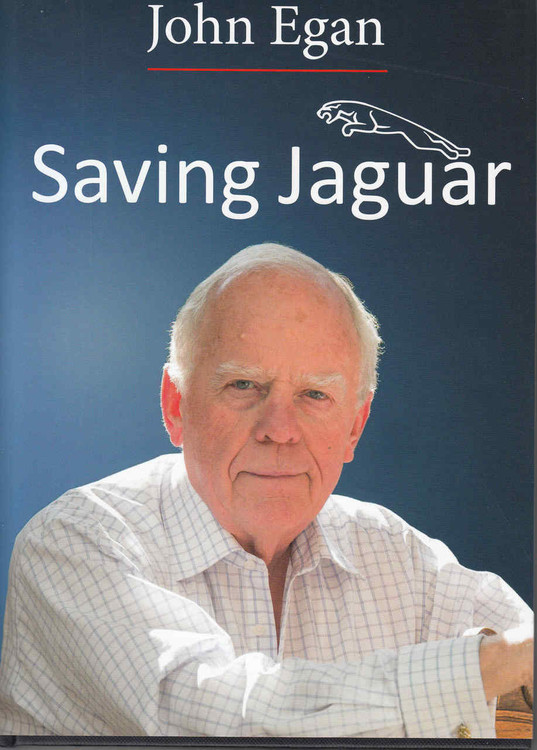 When John Egan arrived at Jaguar Cars in April 1980, newly appointed as Chief Executive, the company's very survival was in grave doubt. In fact, the situation looked utterly hopeless.

Not only was the once-proud Jaguar company a part of the catastrophic BL Cars but he was greeted at the gates by the workforce — on strike!

The odds against saving Jaguar were immense. Quality was appalling, the workforce bitter, the management disillusioned and it was haemorrhaging money. The Labour Government had introduced the 'closed shop', giving the unions and their militant shop stewards immense power.

This book tells the story of how John Egan gradually overcame the odds and, piece by piece, rebuilt this once great company, winning over the workforce, the suppliers, the overseas dealers and, most important of all, the customers. Working initially with BL Chairman Michael Edwardes, and supported by Margaret Thatcher and her Government, Egan and his team of managers overcame every obstacle, every set-back, every challenge. Again and again, it looked impossible. Yet using innovative techniques, intelligence, plain speaking, openness, motor racing and much more, they saved this most charismatic of companies which has created some of the finest and most cherished motor cars of all time.

It is an amazing story that will appeal equally to car enthusiasts, those in business, Jaguar devotees and readers interested in social history.

Sir John Egan has enjoyed a long and highly distinguished business career. After studying petroleum engineering at Imperial College, he was employed by Shell in the Middle East. Following time at London Business School, he joined AC Delco, a General Motors company. He then moved to British Leyland where he helped to set up and ran Unipart, a uniquely successful operation within BL. Four years with Massey-Ferguson in Canada followed before Sir Michael Edwardes encouraged him back to Coventry to try and save Jaguar. Ten years later, he reluctantly sold the company to Ford but achieved a price of £1.6bn ($2.5bn). He was Chief Executive of British Airports Authority from 1990 until 1999 and headed up the construction industry task force, producing the Egan Report, Rethinking Construction, in 1998 and Accelerating Change in 2002. He served as President of the CBI from that date until 2004 when he became Chairman of Severn Trent. Among many other roles, he was Chairman of Inchcape plc, Chairman, and later President, of the London Tourist Board, President of the Institute of Management and is Chancellor of Coventry University. He was knighted in 1986.

John Egan and the Will to Win by John Underwood (Hardcover)

MSRP:
Now: $95.00
Was:
John Egan and the Will to Win by John Underwood  (Hardcover) - 2nd hand book in excellent / like new condition.

MSRP:
Now: $79.95
Was:
Paperback, Published in 2020, 122 pages The 1970s witnessed the rebirth of the British kit car. It may have been the decade that taste forgot, but it was also a period where nothing was off limits...

MSRP:
Now: $35.00
Was:
Paperback, Published in 2020 Kit Car Workshop Notes is Derek Fisher’s follow-up to the popular Special Builders’ Notebook. Written in note form, it’s a collection of hints and...

MSRP:
Now: $175.00
Was:
2020 has been an extraordinary year for Concours. With many Concours events cancelled, the Concours Year celebrates those that were fortunate enough to go ahead and documents those that were not able...

MSRP:
Now: $20.00
Was:
Cavallino The Journal Of Ferrari History Number 240 Dec / Jan 2021 The most enduring and collectable journal on Ferrari in the market for well over three decades !

MSRP:
Now: $65.00
Was:
Paperback, Author - Tony Cripps, 234 pages There’s never been a book like this for classic Mini. Packed with over 500 excerpts from the factory engineering drawings, this book is an...

MSRP:
Now: $300.00
Was:
This Limited Edition comes with a unique cover and a pristine slipcase with metallic foil print. The print run is limited to world-wide 1113 copies. At a stunning size of 12"" x...

MSRP:
Now: $120.00
Was:
336 pages, Paperback Reprint 2020, Published in 2019 This year marks the 50th anniversary of the British cult classic movie The Italian Job. Loaded with sixties swagger, and famed for its endlessly...