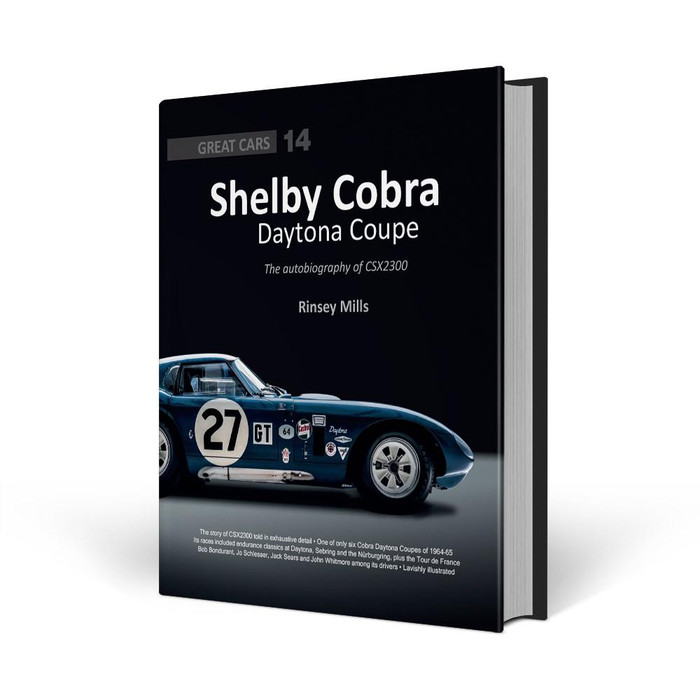 This fascinating book tells the fascinating history of the Daytona Coupe version of Carroll Shelby’s fabled Cobra with special focus on one of the six cars built. The fabulous Daytona Coupe, brutally purposeful in both looks and performance, was created to win the FIA World Sportscar Championship and duly did so in 1965, beating Ferrari in the large-capacity class – the category that really counted as it fired the public’s imagination. The specific car covered in detail in this book, CSX2300, took part in five championship rounds (one in 1964, four in 1965) and played its part in Shelby American’s unique team success. Truly one of the ‘Great Cars’, the Shelby Cobra Daytona Coupe is a most worthy addition to this acclaimed series of books.

• The design evolution and development of the Daytona Coupe, with first-hand input from the car’s designer, Peter Brock.
• All 16 events in Shelby’s two-year campaign with these cars are covered in detail, from the 1964 Daytona 24 Hours (the race that gave the model its name) to the obscure final official outing in the 1965 Coppa Citta di Enna at Sicily’s Enna-Pergusa circuit.
• The five events of CSX2300 receive special attention: the car’s 1964 début on the Tour de France was followed by four more races in 1965 – the Daytona 2,000Km, the Sebring 12 Hours, the Nürburgring 1,000Km and the Reims 12 Hours.
• Brief biographies of the eight men who raced CSX2300 are a further feature: Bob Bondurant, Jochen Neerpasch, Allen Grant, Ed Leslie, Jo Schlesser, André Simon, Jack Sears and John Whitmore.
• CSX2300’s post-1965 history, including a spell of racing in Japan, is explored.
• The expert text is supplemented by 300 period photographs, many previously unpublished, supported by a portfolio of commissioned special photography.

Rinsey Mills bought his first AC while at art school in the 1960s. It came and went, but was never forgotten, and several years later he reacquired it after it had fallen into disrepair. Later still, through a chance conversation while visiting the AC factory at Thames Ditton, he learned that this worn-out, tatty sports car had nearly won the Monte Carlo Rally in 1935.

Since then he has owned, raced and worked on many ACs, and become a well-known marque expert. Through this passion, he came to know Carroll Shelby in later years and became his official biographer. His major work, Carroll Shelby: The Authorised Biography (Haynes, 2012), was published mere weeks before Shelby’s death.

The Dynamics of the Race Car (Danny Nowlan, Hardcover 2020)