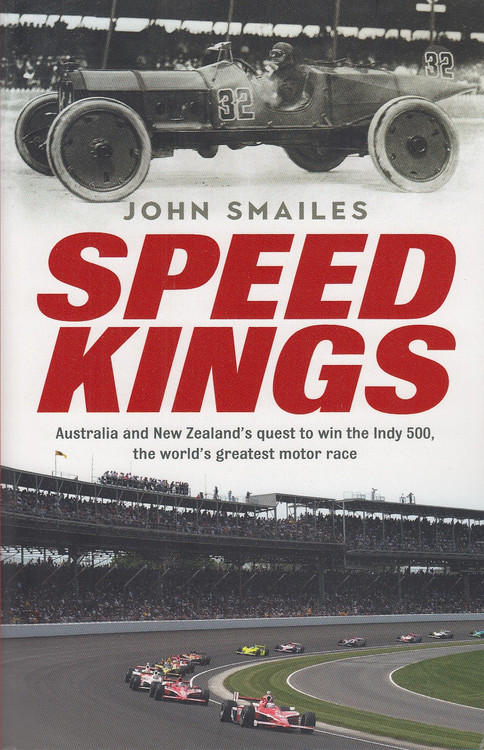 Winning the Indianapolis 500, the greatest spectacle in motorsport, has been a quest for Australians and New Zealanders since the first race in 1911.

Seventeen have tried and two have succeeded: Scott Dixon in 2008 and Will Power in 2018. Rupert Jeffkins, Australia's original speed king, entered the first Indy 500 and on his second attempt in 1912 came within five kilometres of victory. He and Italian Ralph De Palma created legend when they pushed their car to the finish line after it blew up while leading. Speed Kings tells Jeffkins' full story for the first time.

The lure of the Brickyard, paved with 3.2 million bricks, has drawn champions from both sides of the Tasman. Sir Jack Brabham, his son Geoffrey and grandson Matthew have each tried to win. So have the 'big three' of New Zealand motor racing: Bruce McLaren, Denny Hulme and Chris Amon. Now Scott McLaughlin looks set to become the next driver from down under to chase American motor racing's greatest prize.

Indy doesn't offer up victory lightly. Blinding speed - nudging 380 km/h and averaging 280 km/h over 500 miles - makes the Brickyard one of the most precarious racetracks in the world. Forty-two drivers have died attempting the 500.

Speed Kings tells the story of the Australian and New Zealand drivers, team owners, engineers, even commentators who've made the Brickyard their quest

John Smailes has worked as a motor racing journalist and PR consultant for more than four decades. As a young reporter he covered the London-Sydney Marathon and has a substantial library of photographs as well as contemporary interviews and records. His most recent books are Race Across the World (A&U 2018) and Mount Panorama (A&U 2019).

MSRP:
Now: $150.00
Was:
By: Quentin Spurring . Description Then as now, about a quarter of a million people watched the Le Mans 24 Hours almost every June between 1970 and 1979, a fifth and sometimes more of them from...

MSRP:
Now: $150.00
Was:
By: Quentin Spurring . Description The post-war revival of the Le Mans 24 Hours took four years. The site had been used as an air force base by both the British and the occupying Nazis, and bombed...

MSRP:
Now: $149.95
Was:
This was the decade when the Le Mans 24 Hours really began to rock. Already established as a world-class event, the ACO's annual race scaled new heights and up to a quarter of a million people...

MSRP:
Now: $49.95
Was:
By: Bob Watson . Bob Watson has a deep and undiminished passion for driving, and rallying in particular, that has taken him further, faster and to more fascinating places than most Australians. As an...