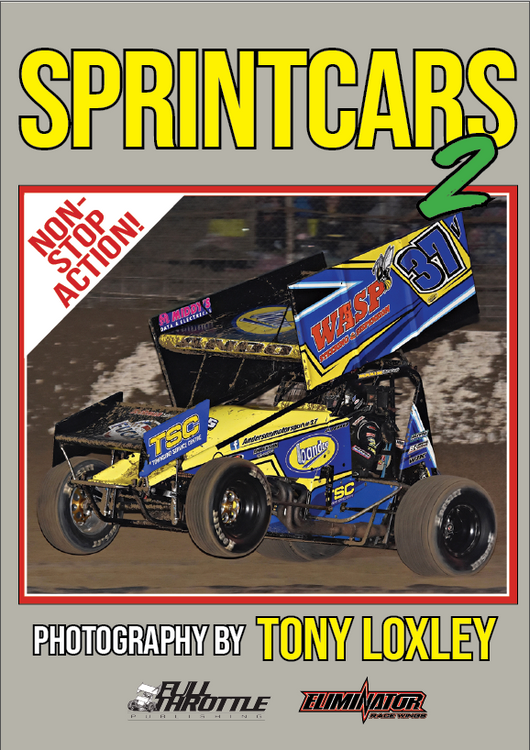 Sprintcars 2 is a lavishly illustrated ride on the wild side covering the sport of sprintcar racing in Australia and the USA via the lens of photographer/publisher, Tony Loxley.
Sprintcars 2 covers the years 1981 right up to today's wild, 900 hp action, and within the 366 stunning pages, are over 1100 images, all beautifully reproduced that will get any fan of motor sport's heart racing, no matter what genre they follow.
The book is a hard-bound, A4 vertical format complete with a dust jacket, and is a follow-up to Tony hugely successful book 'Sprintcars', produced way back in 1986 and published by View Productions.
Forewords are by Australian international James McFadden and American sprintcar legend Danny Smith, and the Afterword by 2019 Warrnambool Classic winner, Robert Farr.
Journalists Brett Swanson and Geoff Rounds have contributed essays on the sport, and artist Tim Rugendyke has illustrated a time line of Australian sprintcar racing, and a futuristic rendering of how a sprintcar may look in 30 years time.
His work has to be seen to be believed.
Sprintcars 2 just isn't just a book, it's a tangible look at the world's most thrilling, and dangerous four-wheel motor sport; but more importantly, a sport where the driver still makes all the difference.

This magnificent motorsport book would make a terrific birthday gift, Father’s Day present, Christmas present or for the Speedway Memorabilia and enthusiast.

MSRP:
Now: $34.00
Was:
By: Tony Loxley . The sixties. What a decade. Vietnam, hippies, bee-hive hair styles, Elvis, the Easybeats, stovepipe pants – and Speedway. Australian speedway in the sixties was huge. Tracks...