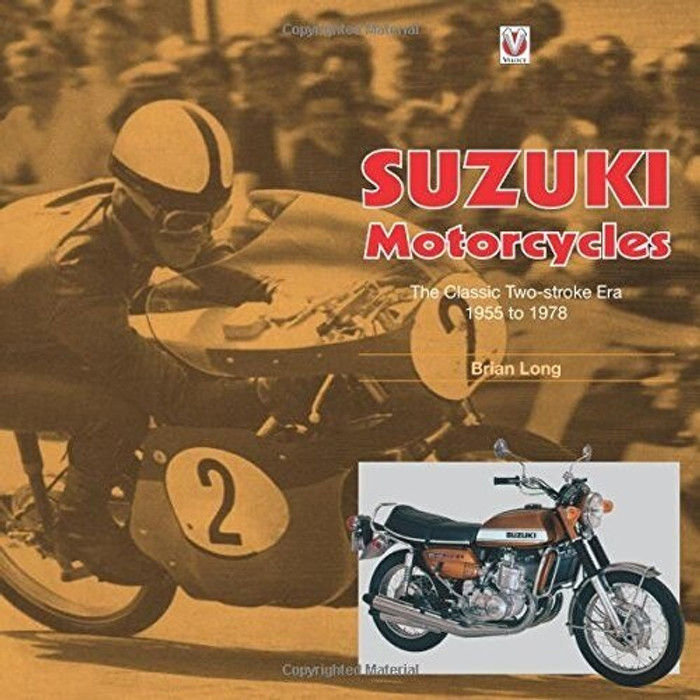 • Definitive history of the two-stroke Suzukis
• Sales in all major markets covered in detail
• Written by a recognized author and historian
• Racing exploits covered year-by-year
• Written with the full co-operation of the factory
• Handy reference charts throughout
• Detailed production figures, including exports
• Unravels what is indeed a very convoluted story
• Contemporary photography to help owners with authenticity issues
• The author is an owner of vintage Suzukis

The definitive history of the two-stroke Suzukis, from little known machines hardly seen outside Japan to the triples that took on the world. The book covers all major markets and uses stunning contemporary photography gathered from all over the world to help owners and enthusiasts establish authenticity or simply take a trip down memory lane.
Synopsis

Researched and written in Japan with the full co-operation of the factory, here in definitive detail is the story of the two-stroke Suzuki bikes – a series of models that put the company on the map, helping it to survive a difficult era that saw hundreds of Japanese motorcycle makers reduced to just four.
Successful immediately, the two-stroke models defended Suzuki's honour on the tracks as well as in the showrooms, handing the company numerous world championship titles. The series has now been all but killed off, but this title helps celebrate an era when the two-stroke was king, concentrating on the 1950s through to the late-1970s.
Additional Information

MSRP:
Now: $69.95
Was:
By: Clymer . Description The Vintage Collection Series, Two-Stroke Motorcycles (VCS-2) contains repair and maintenance information for most single and multi-cylinder motorcycles with engine...

Two-Stroke Motor Cycles and AutoCycles (by The Staff of The Motorcycle, Hardcover, 1945)

MSRP:
Now: $89.95
Was:
By: Mick Walker . Today, Suzuki is a major player on the stages of both the two- and four-wheel motor industries. Suzuki Production Motorcycles 1952-1980 tells the story of how it built its name...

MSRP:
Now: $49.95
Was:
By: Brooklands Books . This is a book of contemporary road and comparison tests, specifications and technical data, rider's impressions, long term reports, new model introductions and design. The...

MSRP:
Now: $129.95
Was:
By: Rob Simmonds . Suzuki broke with tradition when they built the GSX-R750 in 1985 and single-handedly invented the race-replica class that is still the most popular in the world today. Before the...

MSRP:
Now: $89.95
Was:
By: Gary Pinchin . was a revolutionary concept when released in 1985. Rather than being a road bike that could be adapted for racing, the GSX-R750 owed its development to the track. With its...