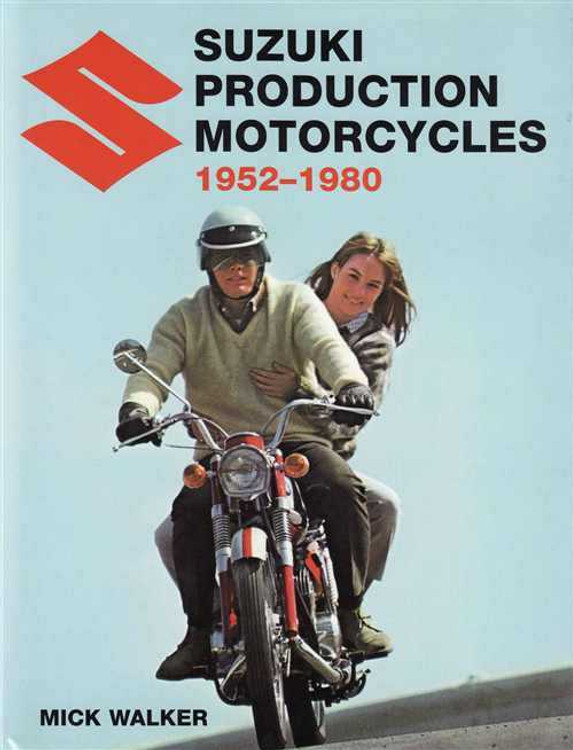 Today, Suzuki is a major player on the stages of both the two- and four-wheel motor industries. Suzuki Production Motorcycles 1952-1980 tells the story of how it built its name during the all-important first quarter century of the company, headed at various times by three generations of the Suzuki family, and went on to be one of the most important names in the motorcycle world.

Although Suzuki arrived on the scene some six years after its great rival Honda, the company was nonetheless ready to challenge Honda in the world's export markets as the 1960s dawned. The marque's first effort, in common with many manufacturers, was an auxiliary engine that could be fitted to a conventional pedal cycle, but in 1954 Suzuki built its first real motorcycle. This machine was four-stroke, but by the time the company's first twin-cylinder model, the TT, arrived in 1956, Suzuki had returned exclusively to two-stroke power: a situation that was to remain until the late 1970s.
By the early 1960s Suzuki was exporting all over the world, including North America and Europe. Besides a vast range of single-cylinder models, which included the K and M series, and later classics such as the B1 OOP (nicknamed the 'Bloop') and the TC120 Trail Cat, there was a series of new twins, including the now legendary T20 Super Six, T10 and T500.

This expansion of both production and racing models continued into the 1970s with Suzuki's first superbike, the liquid-cooled GT750 triple; there were also air-cooled 380 and 550 versions. At the same time numerous singles and twins were available in almost every guise for both on-and off-road use. Towards the end of the decade, with growing fears concerning two-stroke emissions, Suzuki moved back into four-strokes, with motorcycles such as the SP370 trailbike, GS400 twin and GS750 four, and the mighty GSX1100 16-valve.

Motorcycle historian Mick Walker brings readers not only the bikes but also the people and events that built Suzuki into a motorcycle heavyweight in little more than a quarter of a century.

MSRP:
Now: $49.95
Was:
By: Brooklands Books . Audi built its first car in 1909 and joined with Horch, Wanderer and DKW to form Auto Union who was responsible for the grand prix cars. By 1970, when the cars were first...

MSRP:
Now: $49.95
Was:
By: Brooklands Books . This is a book of contemporary road and comparison tests, specifications and technical data, rider's impressions, long term reports, new model introductions and design. The...

MSRP:
Now: $55.50
Was:
Hardcover, published in 2018, 160 pages Features • Definitive history of the two-stroke Suzukis • Sales in all major markets covered in detail • Written by a recognized author and...

MSRP:
Now: $129.95
Was:
By: Rob Simmonds . Suzuki broke with tradition when they built the GSX-R750 in 1985 and single-handedly invented the race-replica class that is still the most popular in the world today. Before the...

MSRP:
Now: $89.95
Was:
By: Gary Pinchin . was a revolutionary concept when released in 1985. Rather than being a road bike that could be adapted for racing, the GSX-R750 owed its development to the track. With its...

MSRP:
Now: $110.00
Was:
By: Marc Cook . Suzuki GSX-R series, introduced amid great fanfare and carrying the company's highest hopes in 1985, is synonymous with performance and has become one of the most evocative marques in...

MSRP:
Now: $49.95
Was:
By: Brooklands Books . After the success of the SJ models in Europe the company introduced the Vitara in 1988 to appeal to fashion and with better road performance and handling. The original hart top...