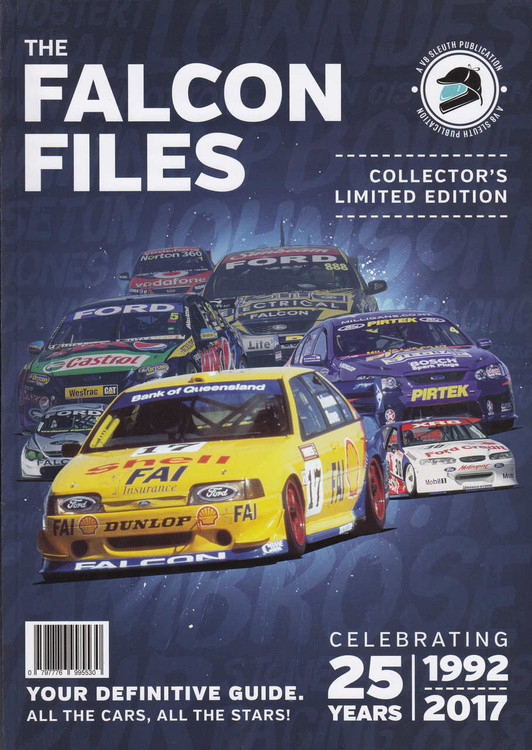 About This Product: V8 Supercars history expert Aaron Nooan and the V8 Sleuth team have produced another amazing collector’s magazine for Australian motorsport fans. The Falcon Files is a limited collector’s edition detailing the history of every Falcon V8 Supercar ever built over the last quarter of a century.

With 240 pages detailing the racing histories of over 150 Falcons from 1992-2017, this perfect-bound special edition collector's magazine features the histories of every Falcon V8 Supercar, including test and prototype cars that never raced, celebrating the 25th anniversary of the return of the mighty Falcon V8 to the Mountain.

From Glenn Seton’s Peter Jackson Racing EB that debuted at the 1992 Sandown 500 through to the EF, EL, AU, BA, BF, FG and current FG X models raced by Prodrive and DJR Team Penske in 2017, every car is covered with a range of previously-never-before-published photos bringing these car histories to life.

The Falcon Files dives into the history of some of Australia’s most celebrated and successful race cars including championship and Bathurst-winning Fords. The cars of the big names who have helped shape Ford’s history are all featured; including Dick Johnson, Marcos Ambrose, Mark Winterbottom, Glenn Seton, Craig Lowndes, Jamie Whincup, Russell Ingall, John Bowe along with the biggest teams in the sport including Dick Johnson Racing, Triple Eight Race Engineering, Stone Brothers Racing, Prodrive Racing Australia, Glenn Seton Racing, Gibson Motorsport and a plethora of privateer racing Fords.

These are the cars that waged war against the General, forming the backbone of Australian motorsport for the past two and a half decades.

This special edition collector’s magazine is a must for lovers of all things Ford.

MSRP:
Now: $69.95
Was:
By: Pete Gill . There are thousands of performance products available to make your bike look and feel like those on the race track and to give it an individual identity. Many are simply...

Maserati All the Cars

Jaguar - All The Cars (Fourth Edition)

MSRP:
Now: $49.95
Was:
Operations Manual April to June 1982 When Britain sent a Naval Task Force to the South Atlantic in 1982 to reclaim the Falkland Islands from Argentinian invaders, it was a triumph of logistical...

The history of Motorsport From the beginnings until today

MSRP:
Now: $89.95
Was:
a book by Jorg Walz, hardcover, published in 2018, 256 pages More than 120 years of motorsport: stories, triumphs and tragedies, sensational innovations, rapid progress, and grandiose dead ends. The...