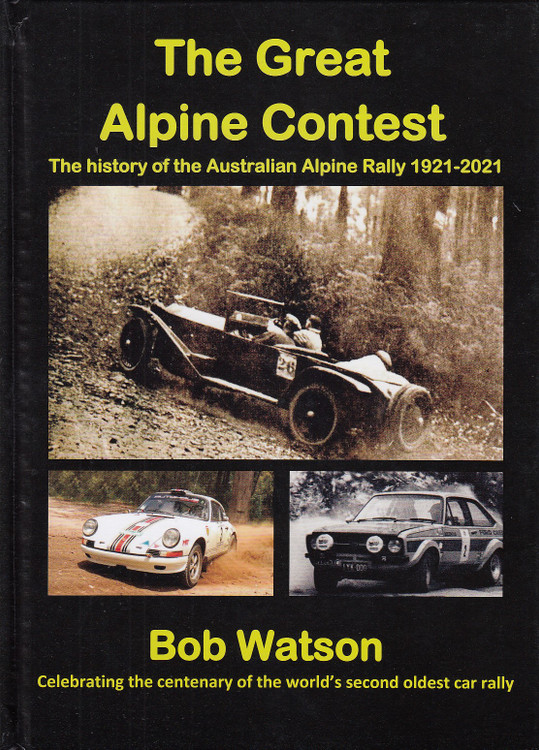 To celebrate the centenary of the Australian Alpine Rally, Bob Watson has written a comprehensive history of the historic event, titled The Great Alpine Contest. The book covers the history of the Alpine Rally from its inauguration in 1921 by the RACV through to its adoption by the Victorian Historic Rally Association and the centenary event to be held at Lakes Entrance in December 2021.

The Australian Alpine Rally is the world’s second oldest car rally, behind the Monte Carlo Rally. It was conceived in 1921 by the Royal Automobile Club of Victoria and organized by a proven director of long distance motoring events, Harry James. The object of the event was to demonstrate the beauty and attractions of Victoria’s Alpine region and thereby stimulate the interest of tourists.

The first Alpine contest was a great success, the competitors enthusiastic about what they did and what they saw. The second event in 1922 had double the number of starters and began what was to be a continuing series of event for a century.

The early Alpines initiated improvements in Alpine roads, and with increased tourist interest, the hotels and services along the way also improved. By 1926 the RACV was being overwhelmed by motoring matters such as road services, insurance and matters of importance to the rapidly increasing number of normal motorists, so the organisation of the Alpine Rally was taken over by the Victorian Light Car Club, later to become the Light Car Club of Australia.

After the hiatus of World War 2, the event continued, with more emphasis on competition. The Alpine region had been opened up and motor cars were common so the event changed in nature to place more emphasis on driving and navigation skills. The Alpine continued through the golden era of rallying in Australia, growing in stature year by year until the unfortunate bankruptcy of the Light Car Club in 1992.

After a period of uncertainty the event was taken over by the Historic Rally Association, which had been formed to foster historic rallying as run in the 1960s, 70s and 80s. The club had already organized events to commemorate the International BP Rally of South Eastern Australia, so the Alpine was a natural follow on. The first HRA Alpine Rally was run in 1991, and has been run every alternate year since.

The Great Alpine Contest records the history of this classic event from 1921 up to the present time. It contains hundreds of photos, many from the 1920s era and many from Australia’s best contemporary rally photographers. It has original contributions from several of the most important Alpine Rally directors and, in their own words, stories from the most successful drivers including Harry Firth, Frank Kilfoyle, Greg Carr and Geoff Portman.

The Best of The Alpine Rally DVD

MSRP:
Now: $49.95
Was:
By: Bob Watson . Bob Watson has a deep and undiminished passion for driving, and rallying in particular, that has taken him further, faster and to more fascinating places than most Australians. As an...

MSRP:
Now: $49.95
Was:
By: Martin Pfundner . The predecessor of today's international rally sport, the alpine trials and rallies of 1910 onwards were an incredible test of endurance for early pioneers and their cars...

MSRP:
Now: $149.99
Was:
The beautiful design of the Alpine Renault ‘berlinettes’ and their extraordinary performances in competition made them the cars to beat in the late 1960s and early 1970s. This book brings...

MSRP:
Now: $75.00
Was:
The fifth volume in Brian Long s series, chronicling in definitive depth the history of the evergreen Porsche 911, from the earliest design studies to the water-cooled cars of today. This newly...

MSRP:
Now: $19.95
Was:
A bus or coach is usually referred to as a Bedford, a Dennis, an AEC or whatever, but in most cases only a badge, or perhaps a radiator grille, identifies it externally in that way; that is the...

MSRP:
Now: $110.00
Was:
This stunning book from award winning publisher Coterie Press, Ian Walker, The Man and His Cars, explores the life and times of Ian Walker. “Walker The Talker” as he was frequently...